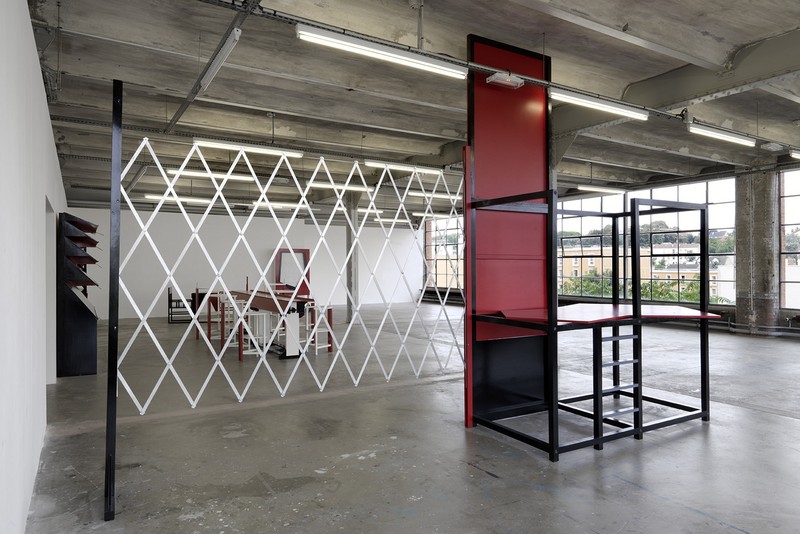 Michel Aubry (born in 1959, lives and works in Paris) has carried out a programmatic body of work for some twenty years now. It has him often interpreting objects or earlier artworks that are emblematic of modernity but using a formal idiom that springs from different handicrafts (including instrument and cabinet making, costume design and upholstery). The process of crafting the object is central to his art and is governed by a production protocol that subverts the relationship between the original and the copy.

For his show at Crédac, Aubry has made reinterpretations of temporary architectures and a number of furniture prototypes that were presented by the Soviet Union at the 1925 International Exposition of Modern Industrial and Decorative Arts in Paris. The pieces include Alexander Rodchenko’s Workers’ Club, Konstantin Melnikov’s kiosk and the USSR Pavilion. The Pavilion is in fact the subject of a brand new piece by the artist.

Paris, 1925. Alexander Rodchenko was staying in the French capital to oversee the installation of the USSR’s show at the Grand Palais along with his Workers’ Club and several kiosks for which he had designed the color. With its simple, economical and functional forms and materials, Melnikov’s style of building design was then the architectural materialization of the Revolution’s new aesthetic, the ideological tool of a renewed relationship to objects and knowledge. In the Foreign Galleries, Rodchenko showed his Workers’ Club, an ensemble of furniture for reading, playing games and socializing that was meant to be reproduced throughout the country, the reflection of a utopian idea of integrating all the arts in daily life and contributing to human progress. Melnikov’s kiosks, which featured popular artisanal products, were exhibited in one of the exposition’s gardens.

Now lost, these Russian Constructivist masterpieces are still rather obscure in terms of documentation even today. Besides the rare photographs and layouts that have come down to us, Rodchenko’s letters to his wife, Varvara Stepanova, form a major source of information for Aubry with respect to the creative context of these pieces. The collection of their correspondence[1] also makes up the plot of a fictional film biography (Rodtchenko à Paris, 2003-2013). The scenes of this biography have been progressively filmed one Aubry show at a time.

Aubry has been tirelessly documenting the production conditions of these avant-garde projects in order to put them into practice in a different context. Thus, starting in the late 1980s, the artist set up a system of equivalences between the Western musical scale and spatial measures, drawing his inspiration from a family of Sardinian wind instruments known as launeddas. These traditional instruments are constructed from reeds, with each stem length determining the note of course, the longest ones producing the deepest notes while the shortest ones emit the highest. Once the artist had worked out a Table de conversion (Conversion Chart—1992) between the musical pitches (low and high) and metric lengths, it was then possible to find for each sound composition “a geometrical equivalent in space, and vice versa.”[2] This system, which governs nearly the whole of his sculptural output, is a “contamination” protocol, both arbitrary and ironic, of the form and functions of the objects he takes for his models.

Aubry uses reeds as both measuring instruments and art materials, whether immediately visible or incorporated in the very structure of his sculptures. Transformed into potential musical instruments (and fitted out with the true reeds of standard reed instruments—the artist’s reeds can indeed vibrate then though this is never done), the original objects change status yet remain “truer than nature.” With his Mise en Musique du Club Ouvrier de Rodtchenko (Putting Rodchenko’s Workers’ Club to Music—1925-2003), for example, the club’s eight reading chairs, originally all the same, have been resized to fit the growing lengths of the reeds making up a mounting scale, as if subjected to a “forced musicalization” that “contaminates the historical truth of the reconstruction.”[3] Conversely, for Mise en Musique du Kiosque de Melnikov (Putting Melnikov’s Kiosk to Music—1925-2009), the artist decided to abide by the object’s original dimensions at the expense of the musical reference.

The doubts and unforeseen incidents that arise during production interest Aubry in that, like a glove turned inside out, they reveal something about the technical skill and craftsmanship involved in the making of the piece. Unlike the profession of the transcriber or counterfeiter, who strive to reproduce as closely as possible the final form of something, for Aubry it’s a matter of putting situations into practice in an approach that is akin to experimental science. He next sought to “put to music” Vladimir Tatlin’s Monument to the Third International, including the tinkering and makeshift solutions that went into it, and thus display its character as a project, rather than the flawless aestheticizing object that is reproduced in museums at times. Similarly, the Soviet Pavilion, originally designed by Melnikov as a metal structure, eventually had to be built in wood, an invisible though ideologically capital difference, and a sign that the avant-garde was indeed confronted with the economic reality of the time. At Crédac, Aubry is showing his 1:10 scale replica, transformed into a piece of sculpture made of reed and wood. The reconstruction is both an active memory and an experience.

Finally, the Fratellini’s Dressing Room (Loge des Fratellini—2005), which Rodchenko visited while he was in Paris, has been recreated at Crédac. The lair of the three famous brothers and clowns was a fascinating place, a kind of cabinet of curiosities for the theater world; turned into a traveling exhibition space in Aubry’s work, it is also a tool accompanying the artist’s films, in anticipation of the day when those films will be shot.

While it is indeed a question of “experiencing [the production process] anew,” Aubry’s art is also about rethinking the legacy of these works through the act of remaking them. Indeed, while they were once imagined as operating in social reality and have since been “smoothed over” by art history to become icons, out of synch with their social and economic context, the question remains: What status do these historical works of art enjoy at present?

By upending the problem of the “loss of the model,” a fundamental question in sculpture, Aubry’s strategies of re-production imply an ontological shift of the works vis-à-vis their originals. Moving from the field of decorative arts to that of the plastic arts, Aubry’s pieces are made independent; becoming nonreproducible and nonfunctional, they acquire a social, political and aesthetic reach that is reactivated in terms of a renewed context. Foreign to all ideological models and all generic forms, Aubry’s approach involves the notions of uniqueness, reversibility and the constant shifting of form. Like Rodchenko and Melnikov, Aubry strikes us as a searcher, pursuing an ever-elusive object, just like the heroes of The Searchers, the title of John Ford’s famous 1956 film which has been borrowed here for the name of the present show.

By drawing on the knowledge and skills of the historian, musicologist and craftsman, Michel Aubry continues to develop an original system of representing the history of forms, reflecting a contemporary outlook that is enriched by the various layers of its past.

Born in 1959, Michel Aubry studied at Strasbourg’s School of Decorative Arts. An artist and filmmaker, he lives and works in Paris and teaches at the Advanced School of Fine Arts of Nantes-Metropolis. His recent shows include the 2012 Biennial of São Paulo (Brazil); the 2012 Biennial of Rennes; Décor & installations in Beauvais, 2012; Les Animaux animés at the Museum of Fine Arts in Nantes, 2010; La Loge fantôme at Galerie Marion Meyer Contemporain, 2010; John M Armleder / Michel Aubry at Parvis in Ibos, 2008-09; Les Constructeurs éclectiques at CRAC Sète, 2008; La Force de l’art at the Grand Palais, Paris, 2006...
The book Les Dispositifs Romanesques de Michel Aubry, with a text by Hugo Lacroix, was published in 2010 by Éditions Nicolas Chaudun / Marion Meyer Contemporain.

In parallel to the exhibition at Crédac, Michel Aubry's work is featured in the exhibition Décorum. Tapis et tapisseries d'artistes at the Musée d'art moderne de la Ville de Paris (from October 11, 2013 to February 9, 2014) and is also granted a solo show at Galerie Eva Meyer, Paris (from 24 October to December 14, 2013).