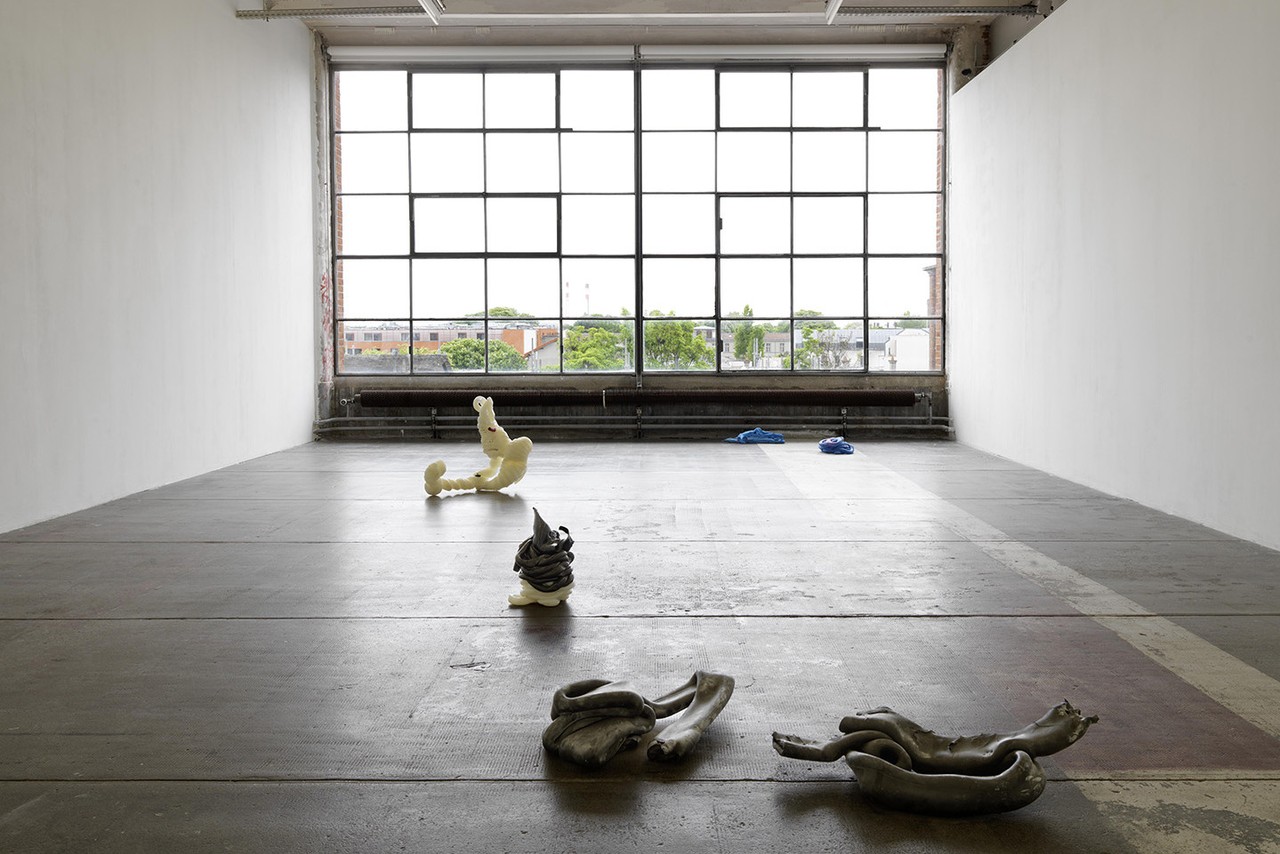 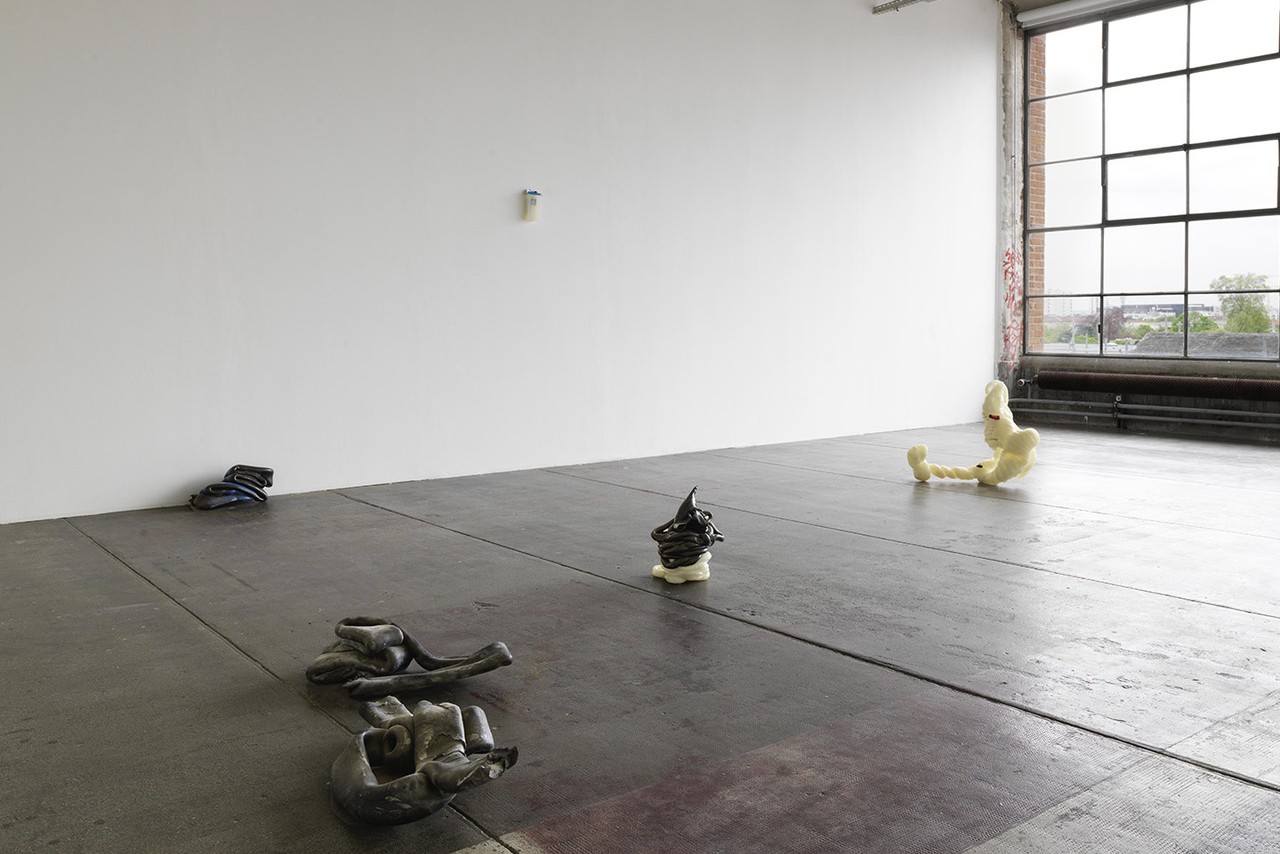 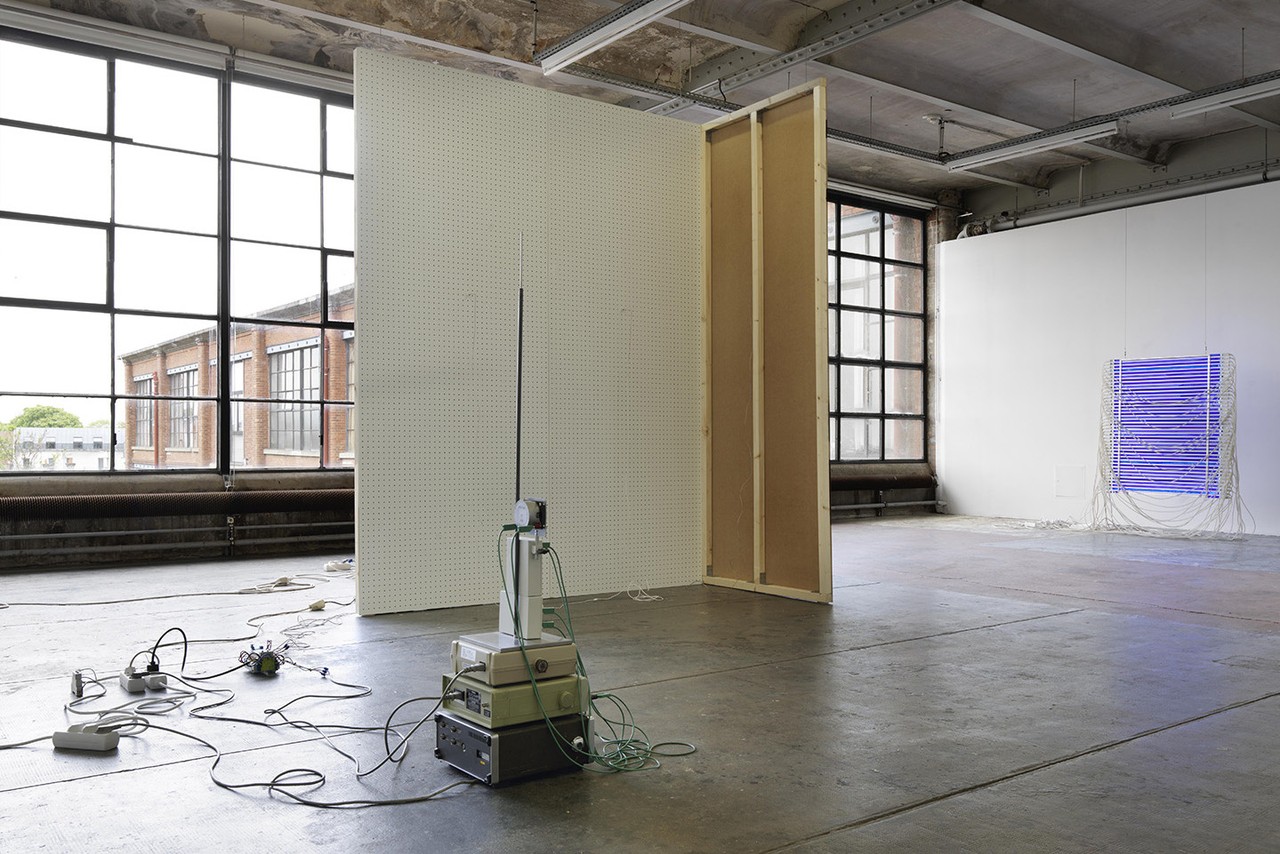 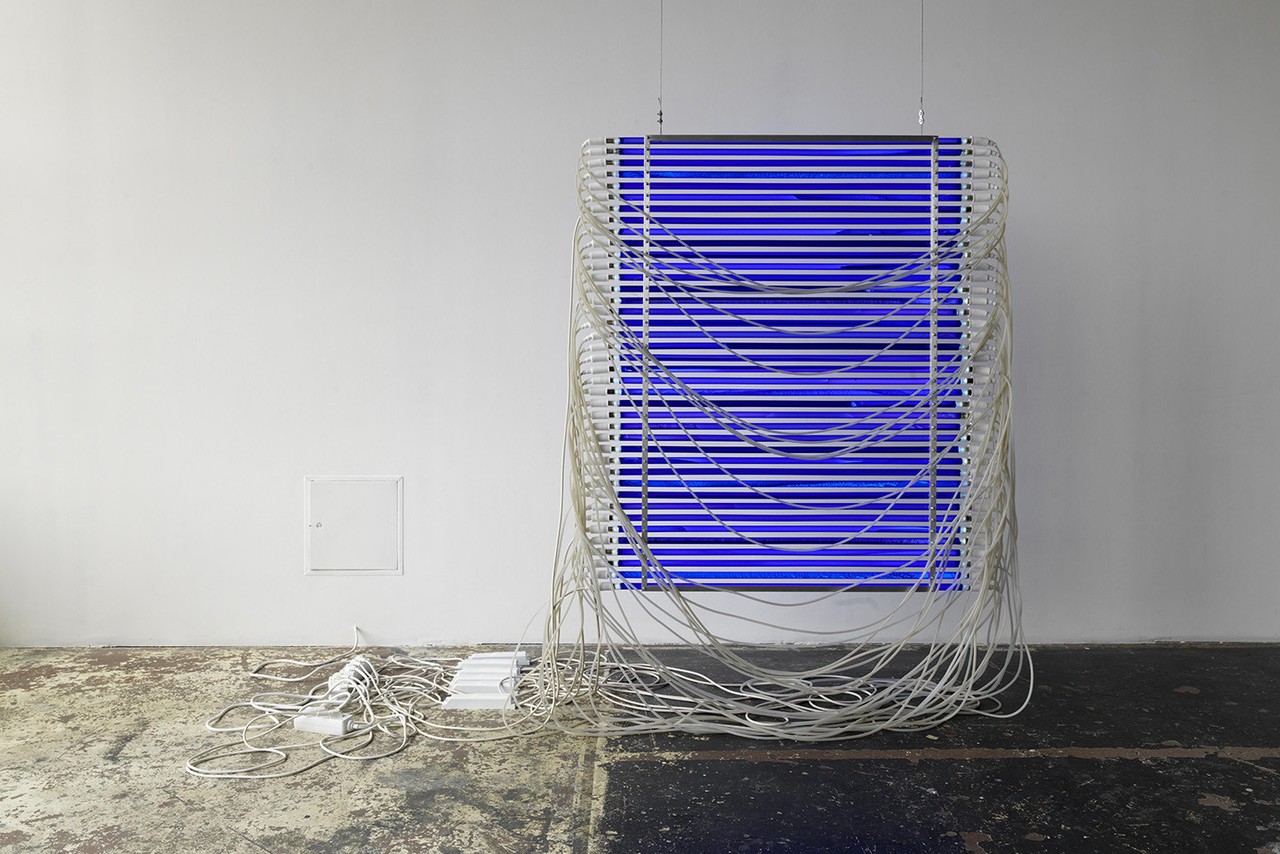 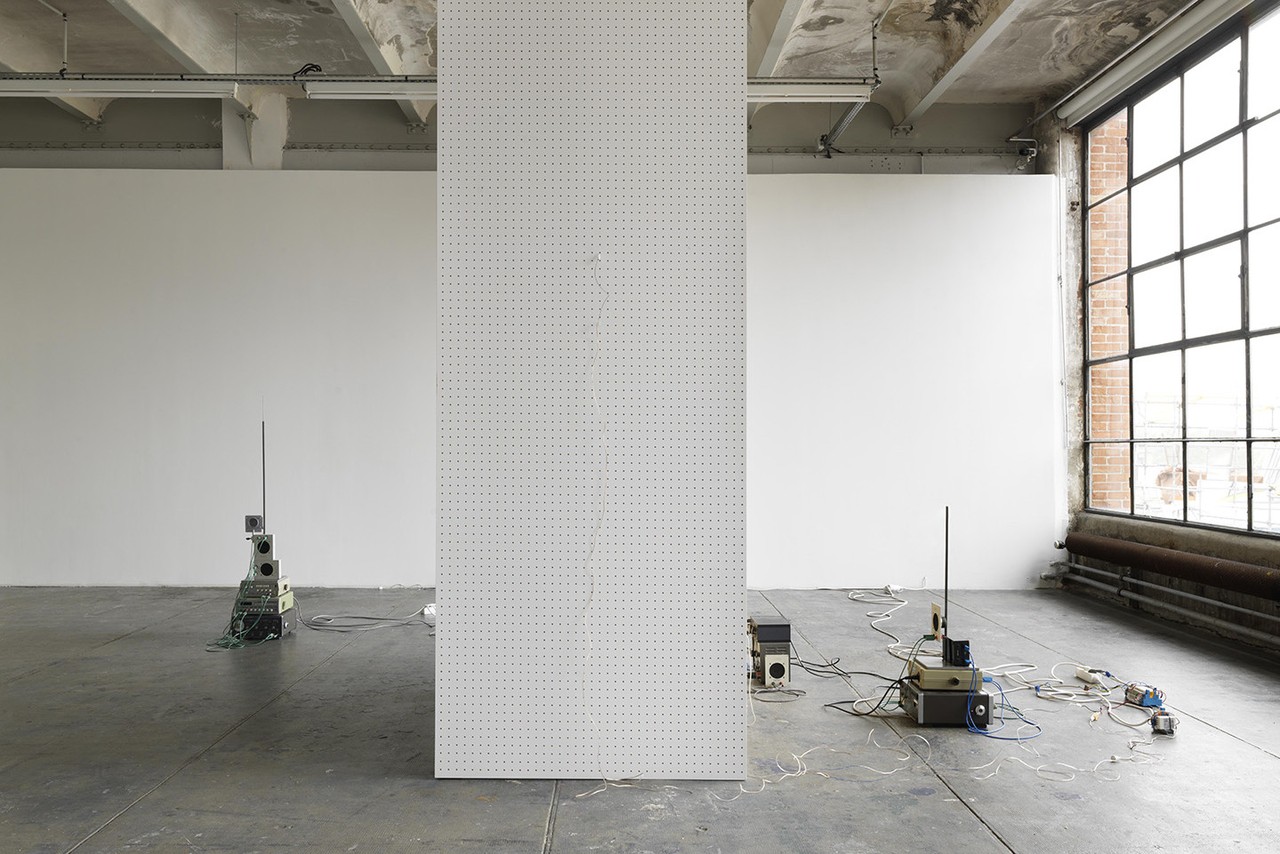 The production of space, or a visualization of imagined space, induces horizon—a vanishing line, a curve in passing—the search for an elusive or hypothetical element that artists call “landscape”, “space”, “territory”. Communicating involves subordinating forms to the content of the message in order to be understood. This is not the case with art, which is close to silence, the tangles of language, the codes by which artists sometimes lead us into the meanderings of meaning. To think and communicate from the space one produces, is not always limited to visual data. This space that comes from a variable set of metaphorical or concrete elements, which delimit a mental plane within which tensions are materialized, where perspectives and dead ends appear.

Nina Canell produces spaces. For instance, she considers her exhibition according to the orientation of the rooms of Crédac: South West, South East and East again. This detail underlines both the way the artist considers space as a central element as well as the meteorological dimension of her own work. Temperature, atmosphere and time are all important factors. In the exhibition, slow-moving mastic gum (Gum Shelf,
2017) coexists alongside a group of Limax Maximus that will inhabit the new installation in the West room (Energy Budget, 2017). Found electrical switchboard cabinets host the nocturnal slugs as they calculate and slowly process a sculptural energy budget, creating a free-crawl choreography and subtly residual derivé between cucumber slices and cable cuts.

Meanwhile, in the South East rooms, an installation of partially heated and compressed fiber optic cable sheaths form floor-based bundles (Shedding Sheaths (B), 2016), and “memory wires” mechanically exercise and coordinate their temperature memory (Flexions, 2016). Punctuated by high-pitched tones and a bouncy ball, the works develop their own proto-language based on energy.

Nina Canell explores the interval, micro phenomena and the at times imperceptible relation between objects. Her work often involves several forms of radiation, sine waves, electricity: all symbolically "charged" with different associations of "affective" forms. Recently described as a kind of "anthropology of energy", it points to the plasticity of transfers - of matter, data, thoughts - which surround us. She uses the exhibition space as a field of correspondences: the place of what happens, has happened, or could happen.

Nina Canell maintains a curious relationship with objects, close to animism. She says that she often observes at length how they behave and interact with each other, redefining then in the exhibition the event occurring only between objects.

Her work is strongly linked to moving and impalpable subjects, such as dislocation, fluidity, transmission and its corollary disconnection.

Nina Canell was born in Sweden in 1979. She graduates from the Institute of art, Design, and Technology of Dun Laoghaire in Ireland. She lives and works in Berlin.
In 2017 she will be part of the Nordic pavilion for the Venice Biennale: Mirrored (Siri Aurdal, Nina Canell, Charlotte Johannesson, Jumana Manna, Pasi “Sleeping” Myllymäki and Mika Taanila).
Currently, her artworks are exhibited at the Kunsthalle Wien (More Than Just Words, 08/03 - 07/05/2017), at Kiasma - Finish National Gallery in Helsinki (Hello World!, 31/03/2017 - 14/01/2018), and at the Tamayo Museum of Mexico City (Ayrton, solo, 01/04 -31/08/2017).
Nina Canell recently showed her work during solo and group shows, from Shanghai (Reflexology, Leo Xu Projects, 2016) to Venice (Accrochage, Punta Della Dogana, 2016), passing by Ivrysur-Seine (The Registry of Promise, chapitre 3. The Promise of Moving Things, le Crédac, 2014), and Stockholm (Mid Sentence, solo, Moderna Museet, 2014). Nina Canell is represented by galleries Barbara Wien (Berlin), Daniel Marzona (Berlin) and Mother's Tankstation (Dublin).
www.credac.fr