The Registry of Promise - 3 : The Promise of Moving Things 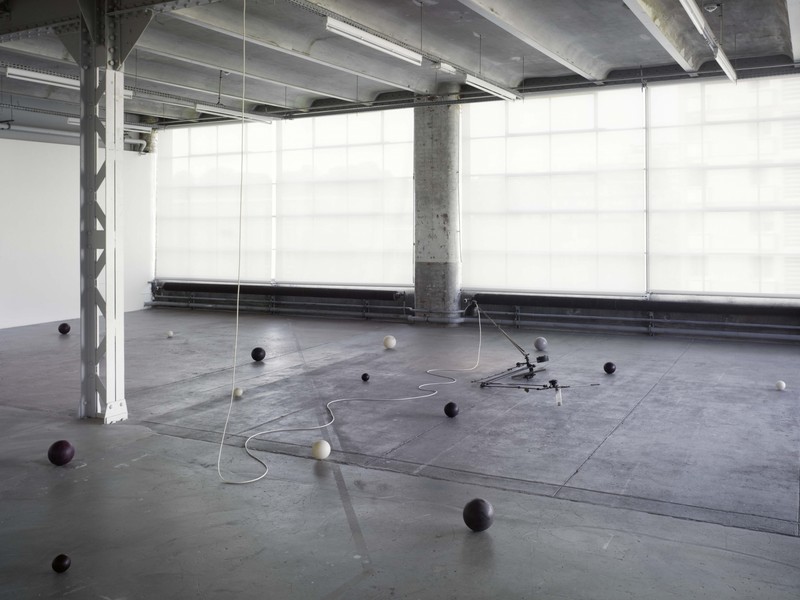 The Registry of Promise is a series of exhibitions that reflect on our increasingly fraught relationship with what the future may or may not hold in store for us. These exhibitions engage and play upon the various readings of promise as something that simultaneously anticipates a future, its fulfillment or lack thereof, as well as a kind of inevitability, both positive or negative. Such polyvalence assumes a particular poignance in the current historical moment. Given that the technological and scientific notions of progress inaugurated by the enlightenment no longer have the same purchase they once did, we have long since abandoned the linear vision of the future the enlightenment once betokened. Meanwhile, what is coming to substitute our former conception would hardly seem to be a substitute at all: the looming specter of global ecological catastrophe. From the anthropocentric promise of modernity, it would seem we have turned to a negative faith in the post-human. And yet the future is not necessarily a closed book. Far from fatalistic, The Registry of Promisetakes into consideration these varying modes of the future while trying to conceive of others. In doing so, it seeks to valorize the potential polyvalence and mutability at the heart of the word promise.

Taking place over the course of approximately one year, The Registry of Promise consists of four autonomous, inter-related exhibitions, which can be read as individual chapters in a book. It has been inaugurated by The Promise of Melancholy and Ecology at the Fondazione Giuliani, Rome, then followed by The Promise of Multiple Temporalities at Parc Saint Léger, Pougues-Les-Eaux, then The Promise of Moving Things at Le Crédac, Ivry, and will conclude with The Promise of Literature, Soothsaying and Speaking in Tonguesat De Vleeshal, Middelburg.

The Promise of Moving Things
The third part of The Registry of Promise, The Promise of Moving Things deals with the so-called life of objects in our current pre-post-apocalyptic paradigm. Influenced in equal measure by animism, the much-discussed philosophical movement Object Oriented Ontology, the surrealism of Alberto Giacometti’s early masterpiece The Palace at 4 am (1932) and even the theoretical reflections of the Nouveau Roman novelist, theorist and editor Alain Robbe-Grillet (an OOOer, so to speak, well avant la lettre), The Promise of Moving Things seeks to address just that– the very idea that there exists some promise within objects in a world in which humans no longer roam the earth. Neither a critical rejection nor an endorsement of these ideas, the exhibition embraces the ambiguity at the very heart of the word promise. It questions to what extent this negative faith in the cultural and animistic legacy of objects is a genuine rupture with the anthropocentric tradition of humanism and to what extent it is merely a perpetuation of it.

Thus does the exhibition consist of works that features objects or processes which seem to possess some form of human subjectivity. For instance, the Austrian, Vienna-based artists Hans Schabus’ sprawling sculptural installation, Konstruktion des Himmels (1994), could merely be a random collection of variously seized wax balls and an elaborate light fixture or the most human forms of celestial organization: a constellation (which it is: a recreation of Apparatus Sculptoris [Sculptor’s Studio], identified and named in the 18th century by Louis de Lacaille). Almost but not entirely by association, German, Berlin-based Mandla Reuter’s sculpture installation, The Agreement (Vienna) 2011, which has been paired with Schabus’ work and is comprised of an armoire hanging from the ceiling, assumes a quasi, supernatural and animistic quality. The transference of so-called human subjectivity is unmistakable in Swedish, Malmö-based Alexander Gutke’s work, Auto-scope (2012). This 16mm film installation portrays the trajectory of a piece of film passing through the interior of a projector, exiting into a snowy, tree-dotted landscape, ascending upward into the sky before plunging back down to earth and looping back into the projector, and repeating the process, all as if in an allegory of reincarnation. The US, New Hampshire-based artist Michael E. Smith’s slight sculptural interventions, which often consist of recycled textiles, materials from the automotive industry, animal parts, and a variety of toxic plastics, are known to possess qualities hauntingly evocative of the human body, as if the spirit of one had entered the other. Drawing his formal vocabulary from machines and tools, French, Dijon-based artist Antoine Nessi creates sculpture, which can perhaps be best described as post-industrial, in which the inanimate seems to take on an organic quality, assuming a life of their own. Finally, the practice of the Swedish, Berlin-based artist Nina Canell is no stranger to the kinetic and to a certain, if specious sense of animism. Something of a case in point, Treetops, Hillsides & Ditches (2011) is a multi-part sculpture comprised of four shafts of wood over the top of which a clump of Iranian pistachio gum has been spread (like the top of a match) and which slowly crawls down the sides of the wood, enveloping it, like living a skin.

Thus is the reception of each work complicated and vexed through issues of subjectivity, projection, necessity, and desire. Now to what extent the works are complicit in that reception both varies and is debatable. Whatever the case may be, it is virtually impossible to say, but this does not necessarily mean that it is impossible to conceive of a world without humanism, as argued by Robbe-Grillet, at its center.

The Registry of Promise is part of PIANO, Prepared Platform for Contemporary Art, France–Italy 2014-2015, initiated by d.c.a / French association for the development of centres d’art, in partnership with the Institut français in Italy, the French Embassy in Italy and the Institut français, with the support of the French Ministry of Foreign Affairs and International Development, the French Ministry of Culture and Communication and Fondazione Nuovi Mecenati.