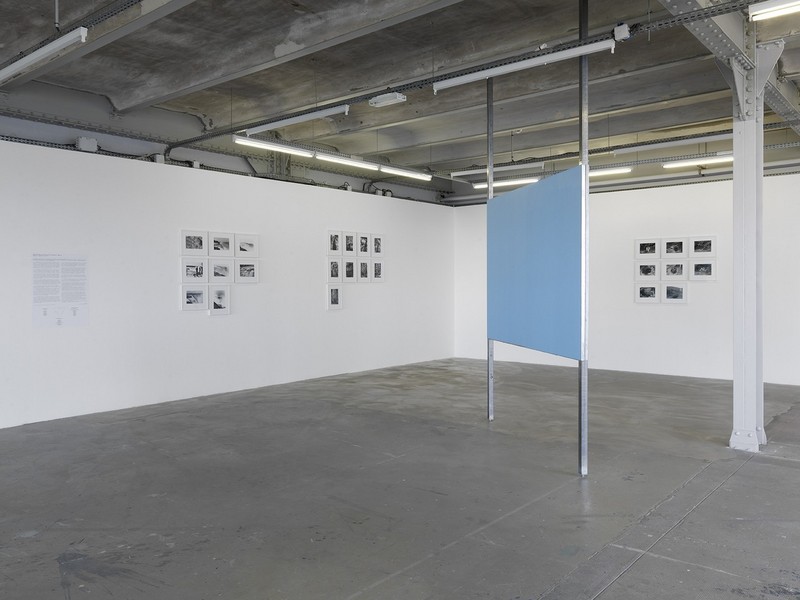 I’ve always liked billboards when they turn blue, that moment when all the messages are covered over. Those mornings in Ivry are my favorite, when the blue of the sky draws a little closer to the asphalt. It is that custom on the scale of the city in its entirety that has served as a template for the very architecture of this exhibition, with bill boards replacing the usual display on gallery walls.

In order to extend the idea that the blue of the sky belongs to “everybody,” I have brought together twenty-two international artists who have been producing work over a period that stretches from the 1960s to the present. Although they may come from different generations, they all share in common gestures or actions that constitute fragile, even tenuous, works of art created with a certain frugality and attention to the surrounding context. They convey an anxiousness about our environment (Agnes Denes, Koji Enokura), ritual (William Anastasi), care of the living (Michel Blazy), the sublime (Guillaume Leblon), time (Nicholas Nixon), praise of slowness (Melanie Counsell), walking (Helen Mirra), the poetic act (Gina Pane), ecological action (Hans Schabus), and revolt (Marie Cool Fabio Balducci). Others treat such themes as the collection (Jean Le Gac), collecting (Dove Allouche, Bela Kolarova), the simple gesture (Lili Dujourie, Jiri Kovanda), the urban gesture (Gordon Matta-Clark), preservation (Lara Almarcegui), anthropological recording (Marcos Avila Forero), writing (Marcelline Delbecq), and play (Roman Signer, Mathias Schweizer).

The show represents a modest inventory that conceptually is a herbarium rather than an atlas. Poetic, occasionally political, and pitched at a level that everyone understands, the works court neither heroism nor the spectacular, and yet they are extraordinary for the thoughts they spark or the position they adopt.

Focusing on “slight” gestures as opposed to the “over-the-top” ones that our screens transmit daily, the exhibition favors slowness, calm, immobility, even a form of banality, like so many perceptible connections that tout le monde addresses to “everybody.”