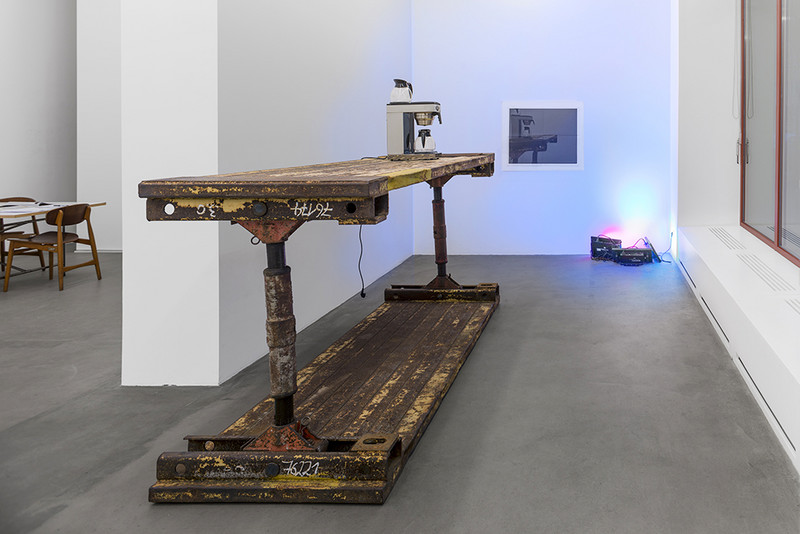 Much of Reuter’s recent work departs from the idea of land – both in its most abstract form, as fixed coordinates on a map as well as land as real estate and property, and subject to development. Whereas a large part of his recent solo show at Kunsthalle Basel was centred on a specific plot of land in Los Angeles owned by the artist, his show at Croy Nielsen approaches the subject in a more abstract manner.

The title ‘Need Better Address’ derives from an envelope addressed by Reuter himself to the address of his plot of land in LA, only to be returned by the U.S. postal service after neither the street nor the addressee mentioned on it could be located. Seemingly an evidence of the nonexistence of this plot of land, while at the same time cadastral maps, published by the city of L.A. prove its existence.

In the context of the show the title refers to white spots on the map, to landscapes not yet defined or named. An abstract approach to endeavors, comparable to plots of films like Fitzcarraldo by Werner Herzog, a fictive portrait of the controversial historic figure Brian Sweeney Fitzgerald itself.

The Diazotypes on view (all Untitled, 2013), a method formerly used by architects and city planners to duplicate construction drawings and land registry maps are barely exposed to light and thrown back to their original materiality, representing drawings yet to be drawn, plans still to be made. Superseded in the present by modern printing technologies, the diazotype method exudes a sense of the past and makes the works as such artefacts, a remnant from a bygone era of architectural planning.

With Natural Spring (2013), a sculpture dominating the main space of the gallery, Reuter approaches the idea of the reclamation of land and the image of a fountain, one of the eldest domesticated natural phenomena as a basic instrument to beautify architecture. A battered trench sheeting shield and a commercial filter coffee machine sitting on top of it point towards two opposing ends of a timeline.

The exhibition is rounded off by the work Advertisers (2013). Consisting of RGB color changers that are placed in a corner of the gallery Advertisers illuminates a small piece of wall in shifting colours. The work is borrowed from the widely spread habit practiced by both realtors who are calling attention to their empty properties, as well as communities trying to enhance the appearance of their monuments and landmarks or fountains.
www.croynielsen.de