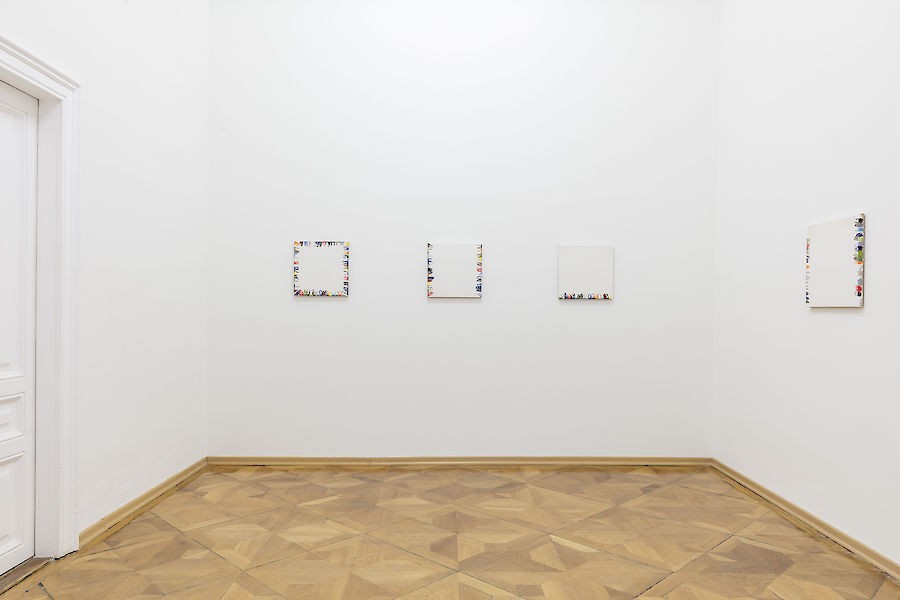 Even though at first glance often straightforward, Jasmin’s works are full of archaic and prosaic symbolism. At closer inspection, we are transferred into a state of doubt, uncertainty and misunderstandings concerning meaning but also method, as a result of sequential conceptual decisions of the artist.

Nicolas Jasmin’s paintings are simultaneously full of traces and devoid of them. Materials and concepts clash into an aesthetics of the incomplete, and motifs are usually sourced through quotations, which are not necessarily revealed to the viewer. Perhaps songs from a playlist or a partial plate number – Jasmin prefers to use the databank our reality provides, as he always trusts our own perception to shift context and meaning – basically counting on our capacity to misunderstand.

The group of paintings shown on this occasion carries the title PLES, which stands for Partially Laser Erased Square, and refers to the deployed technique of subtraction. A carefully calibrated laser beam takes off layers of a painted surface, some coats are eliminated, partially erased, others stay – a square in a square appears, reminiscent of codes of abstraction.

The small formats, no larger than 45 x 45 cm, create a concentrated and intimate order amongst themselves, where loss of energy to the spectacular is avoided. The chromatic abundance on the other hand is rather unusual for Jasmin’s work and refers to the complete palette the artist used during the year of 2017. Literally remains or leftovers of other paintings, bearing marks of fingertips, they present us with an act of end-of-year self-reflection, perhaps a preparation for a new year’s resolution?

The juxtaposition of the act of painting, traditionally perceived as intimately linked to craftsmanship or at least manual labour, and a sophisticated, high tech, industrial technique such as the laser beam, creates an uncanny clash – a playful game of regression and pleasure, Jasmin calls it. The use of hessian only widens the perceptual schism bestowing the work with a haptic quality more than unusual in the high-tech context.


In times where many of us are obsessed or at least feel pressured to keep up with technology, this exercise in consolidation of traditional conceptual painting and technology seems particularly intriguing. And if we are to believe those who claim abstract painting in itself might not be particularly interesting anymore we can confidently argue that by expanding its importance and endowing the abstraction with meaning through the way it is produced it might be able to fully redeem itself.1 Jasmin’s works are abstract and representational at the same time, as they represent a digital process of abstraction which possibly reconciliates our contradictory urges to indulge in nostalgia just as much as to stay on top of our technological game.