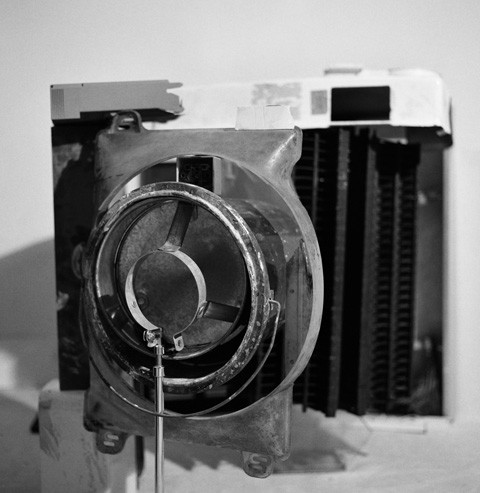 This is the second in a series of exhibitions taking place at Culturgest, all based on a simple premise: the presentation of three concurrent solo exhibitions that establish a dialogue between one another and ultimately come together to form a group exhibition. This premise, expressed both in an abbreviated and literal form in the project’s title, is then proposed to different curators, with the pure potentiality of such a premise being opened up to their ideas, areas of interest and choices. This time, guest curator Friedrich Meschede has chosen Hermann Pitz (Oldenburg, Germany, 1956), Michael Snow (Toronto, Canada, 1929) and Bernard Voïta (Cully, Switzerland, 1960), artists who use photography and film as their preferred media.
A common thread uniting the three artists is established by the topos of the studio. Nowadays, art is a form of expression that lives off what is public, frequently seeking its motifs in public life. In particular, the evolution of photography has contributed to this phenomenon (also in art) by permanently showing reality in a clear and unmistakable fashion. For the three artists, however, the studio continues to be a private place in which to develop concepts and inventions from the world of the image that project another reality. The use of photography and film by these artists “documents” this other meaning of art as the individual sketching of a counter-world, as the creation of something hitherto unseen.
www.culturgest.pt