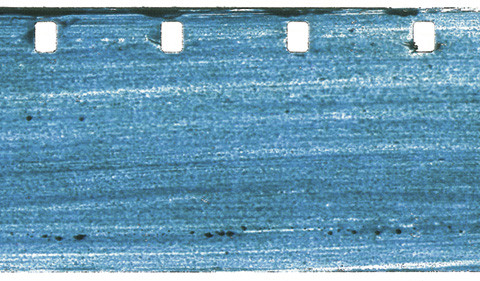 In the room at Culturgest in Porto set aside for micro exhibitions, three pieces by Helen Mirra are presented that are closely related with the genealogy of works reconstructed in her Lisbon exhibition to be held during the same period: a hand-coloured 16 mm film, Map of parallel 81 ̊N at a scale of one foot to one degree longitude, from 2001; a sound piece made in collaboration with Ernst Karel, A Map of Parallels 41 ̊ N and 49 ̊ N at a scale of ten seconds to one degree, from 2002; and an LP, specially released for this occasion, with the recording of a performance by Helen Mirra and Fred Frith in 2004, Kwangsi-Quail. This presentation thus functions as a small satellite of the exhibition that brings to Portugal the remarkable work of an artist who still remains largely unknown in these parts, despite her already lengthy exhibition career, which includes, among others, solo exhibitions at the Renaissance Society, in Chicago (2001), Whitney Museum of American Art, in New York (2002), University of California Berkeley Art Museum (2003), Dallas Museum of Art (2004), DAAD Galerie, in Berlin (2006), KW Institute for Contemporary Art, in Berlin (2012), or Haus Konstrutiv, in Zurich (2012).
www.culturgest.pt