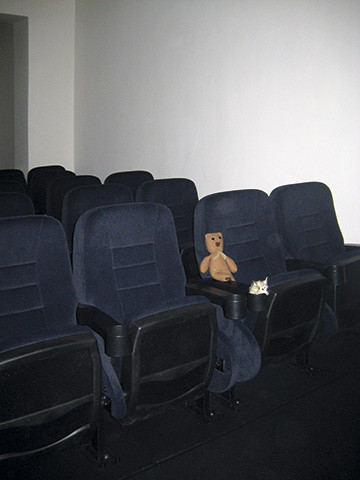 Culturgest offers a contrasting parallel to the exhibition Honey, I rearranged the collection... by artist, by reactivating a very particular exhibition, organised in 2011 by the art collective Établissement d'en face, in Brussels, which, over the next two years, toured Berlin (Isabella Bortolozzi), Rotterdam (Witte de With) and New York (Ludlow 38). The exhibition Celluloid Brushes: An anthology of the filmic perception of the artist from 1942 till today comprises posters commissioned from seventy artists, relating to the most diverse films about the life and work of famous or fictitious artists. These range from rarely screened or obscure films to Hollywood productions, including art house films and others made by artists. Included in this extraordinary line-up are some artists who have exhibited at Culturgest in recent years, such as Jos de Gruyter and Harald Thys, Koenraad Dedobbeleer, Bernard Voïta and Danh Võ, but also Saâdane Afif, Leonor Antunes, Thomas Bayrle, Keren Cytter, Olivier Foulon, Michel François, Rainer Ganahl, Karl Holmqvist, Silvia Kolbowski, Sophie Nys, Richard Venlet, and Peter Wächtler, among so many others.
www.culturgest.pt