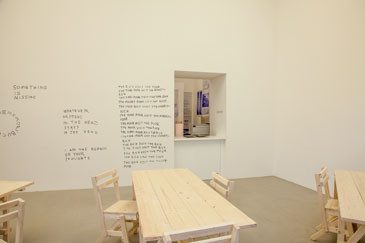 “Agency Of Unrealized Projects“ (AUP) is a project by e-flux and the Serpentine Gallery London devised by Hans Ulrich Obrist, Julia Peyton-Jones, Julieta Aranda and Anton Vidokle. The Berlin edition of AUP is conceived in collaboration with Berliner Künstlerprogramm/ DAAD.

Unlike unrealized architectural projects, which are frequently exhibited and circulated, unrealized artworks tend to remain unnoticed or little known. But perhaps there is another form of artistic agency in the partial expression, the incomplete idea, the projection of a mere intention? Agency of Unrealized Projects seeks to document and display these works, in this way charting the terrain of a contingent future.

Though the state of being unrealized implies the potential for realization, not all projects are intended to be carried out. In other instances, artists deliberately leave works incomplete, to record interesting “failures” or experiments. Other planned projects involve consciously utopian, non-utilitarian, and conceptual spaces that were not made available for realization. Whether censored, forgotten, postponed, impossible, or rejected, unrealized projects form a unique testament to the speculative power of non-action.

AUP follows “Unbuilt Roads: 107 Unrealized Projects” collated by Hans Ulrich Obrist and Guy Tortosa following several years of international research conducted in the late 1990s (and published in form of a book in 1997, Gerd Hatje, Ostfildern-Ruit, Germany), with contributions by 107 artists, from Vito Acconci to Rosemarie Trockel. Under the name of AUP these artist projects were first presented by e-flux in New York in 2009 followed by an open call for unrealized projects published by in 2011 and an AUP exhibition in Basel in 2011.

This new open call for unrealized projects is launched on the occasion of a Berlin edition of AUP in collaboration with the Berliner Künstlerprogramm/ DAAD. Additionally, numerous Berlin artists, as well as former and current guests of the Berliner Künstlerporgramm/ DAAD were invited to participate. The AUP will take up temporary residence at the daadgalerie in Berlin from September 9th to October 20th 2012 to present newly submitted projects as well as the existing inventory of the AUP archive.

The public is also invited to explore and to browse through the growing archive of unrealized artistic ideas. The daadgalerie installation of AUP will be accompanied by a public program of lectures and presentations with numerous guests considering artistic and philosophical perspectives of the “unrealized“ or the “unrealizable”. The lecture series commences with the opening of AUP on Sunday, September 9th, with presentations by Sophia Al-Maria, Jimmie Durham, Hito Steyerl and Stefan Wewerka, as well as Hans Ulrich Obrist and Anton Vidokle.

Open Call can be found at: