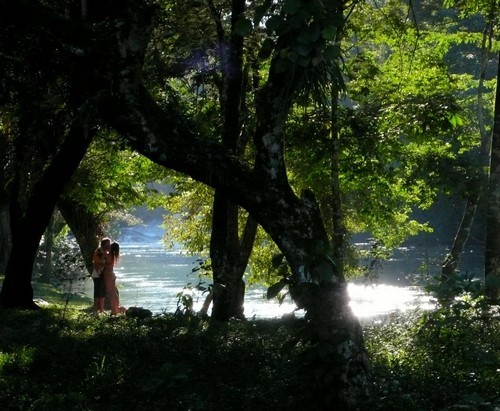 Agnieszka Brzezanska is mainly known for being a painter. Yet in her work she plays with a choreographic and rhythmic clarity of gestures that employ a myriad of mediums between which she effortlessly jumps and gladly intermingles. In her chromatic surface paintings organic and morphological forms emerge in which a modernist vocabulary is occasionally evoked. But they remain ephemeral, unfinished, and process driven: what they represent often becomes evident only through repetition and variation.

Agnieszka Brzezanska’s work also demonstrates a preference for mirrors and bodily self-reflections and is therein reminiscent of the US-American experimental filmmaker Maya Deren, whose most famous films could be considered “camera choreographies,” i.e., movement and rhythm in images. Like Deren, Brzezanska’s art makes present the tension between the spiritual and the ethnographic. A text-quotation used in one of Brzezanska’s photos states: “When the anthropologist arrives, the gods depart.”

In her new video works due to debut at the daadgalerie under the title “Playlist”, Brzezanska deals with the spirtual in the form of contemporary esoterics. “Playlist” shows videos downloaded from YouTube, which are projected in three different series (playlists) on three projections in the main room of the daadgalerie. The various clips are all allocated to contemporary esoteric forms or to what was referred to in the 1980s as “New Age.” Among them are mediation films, instructions for spiritual techniques of furthering consciousness and prophecies of a new era. The mainly abstract vocabulary of forms, the music and voiceovers of the clips are foremost of interest to Brzezanskaa on the formal aesthetic level. Her selection of esoteric YouTube clips demonstrates her quasi-ethnographic interest in the therein propagated practices and Weltanschauungen that form a collective, unfiltered, atemporal, and, in this case, spiritual intelligence, “Everything from brilliant insight to scurillous rumor” (Bruce Sterling), which is significant in the age of Internet culture.

source version of the show:
http://www.youtube.com/user/anieska#g/p

Agnieszka Brzezanska was born in 1972 in Gdansk, Poland. In 2008/09, she was a guest of the Berliner Künstlerprogramm/ DAAD. Following the solo exhibition “Playlist” in the daadgalerie in April will be a solo show called “Galactic Resonance” at Hotel, London, and a more comprehensive solo exhibition called “Cosmic Equation” will take place at the Kunsthaus Baselland in Basel in May 2010. In addition to exhibitions at the Center for Contemporary Art Ujazdowski Castle and the Zacheta National Art Gallery in Warsaw (2006), at Karma International, Zurich, and in the Galerie Kamm, Berlin, Brzezanska took part in numerous international group shows, such as “Open Space Living Art TLV,” the International Biennial for Contemporary Art, Tel Aviv (2008), and the Forum Expanded of the Berlinale film festival (2008), the Liste at Art Basel (2007), and “Take One” at the Museum of Fine Arts, Houston, Texas (2006).

The monograph L’artiste, le modèle, la peinture by Agnieszka Brzezanska will be published on the occasion of the exhibition (co-published by the artist, Sternberg Press, and the Berliner Künstlerprogramm/DAAD).
www.daadgalerie.de