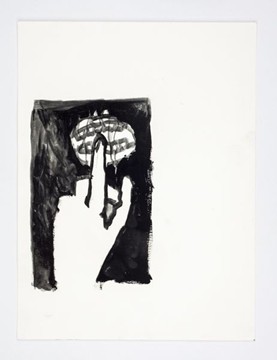 Anna Boghiguian is a painter and drawer with a unique, direct and personal approach. Born in Cairo, Egypt in 1946, she lives nomadically between Cairo, India, Europe and other new destinations time and again. She studied art and music at the Concordia University in Montreal and political science and economics at the American University in Cairo. Over many years, during her travels, she developed diary-like series of colored drawings and collages, often images mixed with text, full of impressions that can be read as snapshots or as thematically bundled descriptions of the state of our world. At the recent documenta13, Boghiguian‘s powerful drawings (»Unfinished Symphony«, 2012) impressed in a bold juxtaposition with the gouaches (also constructed from text and image) of the German-Jewish artist Charlotte Salomon who was killed in Auschwitz.

In her work, Boghiguian captures themes as different as for example the environment of leprosy sufferers in India or the complex town structure of Cairo, »the traffic on the streets, the people in the coffeehouses, but also the stillness of the City of the Dead, and recently, the signs of conflict and collapse« (Eva Scharrer). The figural is merged with text in mainly compact and multilayered, sometimes even reduced drawings or collages. Even in the defamiliarized style of her drawings the events referred to always seem immediate and urgent. In the drawing “Films of Cairo, The Crocodile moves” (2010) the pulse of the city of Cairo is depicted as a filmic sequence of images. Every image is marked by a different kind of dynamic, from smog to traffic to the current of the Nile.

Boghiguian often creates intellectual and compositional links between antiquity, literature and poetry as well as present issues. In recent works she engages intensively with sensory perception, in particular with the sensory organs, ear, eye, mouth. This theme is continued in new drawings and collages that were made during a short-term DAAD Artists-in-Berlin Program grant. In the show at the daadgalerie these new works are complemented by sculptural elements. Characteristics of the current Berlin are combined with reflections on the continuous myth around Nefertiti, the wife of Echnaton, and the current situation in Egypt. Some new drawings were made on a trip to the void of tourists Amarna, formerly Akhenaten, the place of discovery of the Nefertiti-bust. In addition, older works by Boghiguian, travel sketches from the 1980s of Berlin and other places, will be shown for the first time.