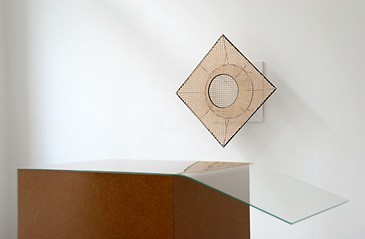 Armando Andrade Tudela presents a group of new works entitled "Torcida". The minimalist objects made of glass, steel and rattan display simple geometric abstractions and interventions into the material.
The Spanish adjective torcido/a means "crooked" or "askew", Torcidas is also what the famous and notorious associations of football fans in Brazil are called. The name is based on the verb torcer, which means "to root for" but also "to wring" and "to turn". The supposition is that the behavior of the fans present at the stadium could help the team gather strength to beat the opponent. The title points to a leitmotif of the exhibition, reconciling geometric form variations and forms of social communities.
Four Rattan wicker wall objects play on a recurring theme in Andrade Tudela’s works: how seemingly identical formal means and formulations can gain a completely different meaning and grammar when seen within diverse historical and cultural contexts. In the past, Andrade Tudela has frequently dealt with this question in considering the differences, but also the similarities of modernity and its development in Europe and South America. The use of rattan points to an "exotic" or "soft" modernity and to the romantic or colonial notion of an economy based on traditional handcraft and natural products. At the same time, the rattan objects are reminiscent of Op-Art or optical experiments and vouch for Andrade Tudela’s abiding interest in forms of expanding perception and the artistic and social experiments of the (counter-) culture of the 1960s.
The series of geometric studies made of glass and MDF created for the exhibition presents variations of a matrix. These objects can be classified somewhere between study, model, and sculpture, filtering and refracting upon the various works of the exhibition as well as the exhibition space.
Rather than presenting a finished product, or developing a specific formal language, Andrade Tudela is interested in the character of language and the readability and possibilities of Minimalism and geometric abstraction in its current reception.
Early 2010, Andrade Tudela’s first monographic catalogue / artist’s book will be released in collaboration with the Berliner Künstlerprogramm / DAAD, the IKON Gallery in Birmingham, and the FRAC Bourgogne in Dijon.

Armando Andrade Tudela (b. 1975 in Lima, Peru) was a guest of the DAAD’s Berliner Künstlerprogramm in 2008/09. He studied at the Pontificia Universidad Católica in Lima and at the Royal College of Arts in London. In Lima, he was founding member of Espacio La Culpable, an artist run space and art collective. 2004/05, he was a Fellow at the Jan van Eyck Academy in Maastricht. 2008/09 Andrade Tudela had solo exhibitions at the Kunsthalle Basel, the Frankfurter Kunstverein, and the Ikon Gallery in Birmingham. He has participated in numerous biennials, such as the Lyon Biennale 2007, and in international group exhibitions, such as the Walker Art Center in Minneapolis (2007) and the MACBA in Barcelona (2009). Upcoming solo exhibitions in early 2010 include MACBA, Barcelona and FRAC Bourgogne. Armando Andrade Tudela currently lives and works in St. Etienne, France and in Berlin.
www.daadgalerie.de