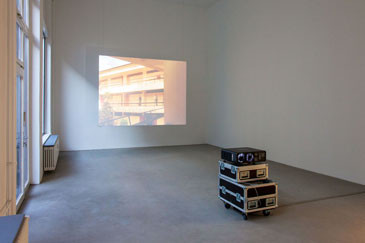 The exhibition UNSCH/URP focuses on the film UNSCH/Pikimachay and the publication UNSCH/URP. In the film, the artist shows different architectural spaces at the Universidad Nacional San Cristóbal de Huamanga (UNSCH) in Ayacucho, Peru, which served as a platform in the formation of the subversive group the “Shining Path” during the 1960’s and 70’s. These spaces are contrasted with images of the archeological site Pikimachay in the Central Andes – one of the earliest human settlements in the region and an emblem of an early community. The publication is the discursive complement to the film. It contains interviews with witnesses of the “Shining Path” formation at UNSCH and members of the architects collective “Las Bestias”, who were accountable for an educational experiment at the Universidad Ricardo Palma (URP) in Lima during the explosion of terrorism in Peru in the mid 1980's. Film and Publication were produced by the Museo de Arte de Lima-MALI and presented there this summer. The Berlin version of the exhibition includes the film, the publication and a new installation piece by Armando Andrade Tudela.
www.daadgalerie.de