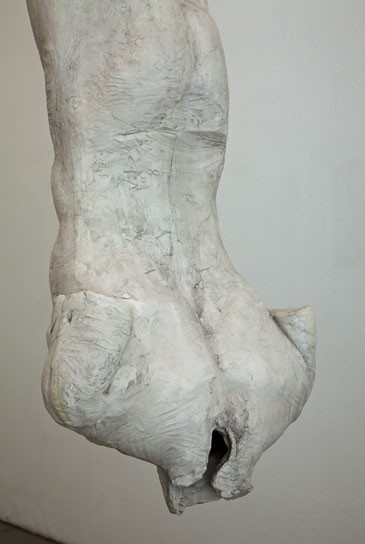 Brandt Junceau is an artist and writer. In his sculptural works, he references the vocabulary of classical sculpture and expresses thereby his very personal access to our artistic heritage. His interests lie in figurative sculpture and, in general, the “Beseelten” (literally “soul-ed”) in art: from the Pygmalion myth to the fusion of classic and folk art of the early 20th century American sculptor Elie Nadelman.

In Berlin, Junceau concentrated on modern sculpture, and especially on the work of Georg Kolbe, who lived in Berlin from 1904 up until his death in 1947. Today, Kolbe’s work can be found in his former atelier in Westend (Berlin), now the Georg Kolbe Museum, and in several other public spaces throughout the city. In the daadgalerie, Brandt Junceau puts two recently finished life-size Figures in bronze and plaster with an original Georg Kolbe sculpture Somali-Torso (1912) in correspondence with each other. Junceau’s new sculptures act as a reflection upon Kolbe’s (early) elegant male torso.

Unlike Kolbe, Junceau developed his figures without the employment of a living model, but rather based on drawings, part and parcel of his thoughts on figurative sculpture in general. In the arrangement in the daadgalerie, Kolbe’s bronze Somali-Torso is confronted by Junceau’s abstract form, which though cast in bronze is barely more than two-dimensional: that is, it consists of just enough volume to make it considered a statue at all.

Junceau’s next reaction to Kolbe takes on the form of an over life-sized male figure made out of plaster that hangs over one’s head like a trophy or a religious offering. Although the artist’s style is by no means naturalist: it is rather worked through in its materiality, hinting towards the life underneath the surface. Junceau focuses on the emotional quality of figurative sculpture, situated at the intersection between the life and work of an artist.

Brandt Junceau is known for his neverending work on graceful heads made out of clay, wax or bronze; faces of hybrid creatures, caught somewhere between human and animal. Again and again he revises these forms, going against both, the principle of seriality and a sense of the “completed” sculpture. These early works of Junceau will be presented in a parallel exhibition of the artist Christian Philipp Müller, which will also open on the 18th. Titled “Im Wohnatelier,” the exhibition places Junceau’s work in an atelier-like situation with furniture works designed by Marlene Poelzig. Her husband, the architect Hans Poelzig, collaborated with Georg Kolbe on several occasions, for example, Kolbe’s sculpture Die Nacht (The Night) can be found in the foyer of Poelzig’s Haus des Rundfunks (House of Broadcasting) in Berlin. Vaguely reminiscent of the atmosphere of the 1920s, Christian Philipp Müller’s exhibition evokes the working and living situation of the creative heads of this era. The original furniture pieces of Marlene Poelzig along with the carpets of the Belgian firm Casalis create a frame for the series of smaller sculptures by Brandt Junceau.

Brandt Junceau, born in 1959 in New York City, lives in New York City and in Berlin. For the year 2010 /11, he has been a guest of the Berliner Künstlerprogramm of the DAAD.

In collaboration with the Georg Kolbe Museum
www.daadgalerie.de