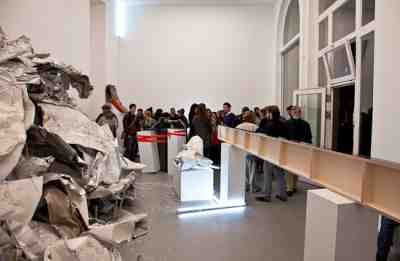 Danilo Dueñas uses materials from everyday life and from his immediate surroundings: neon lights, car tires, rough construction wood, staircase planks, intact or disassembled furniture, packaging materials and other found objects. He incorporates these things into room-filling, yet seemingly fragile constructions. As if from a ghost’s hand, these objects find a new order. Reflecting on art as an invitation to speculation, his work calls us to question, what constellations and systems might be beyond the given?

However, the “uprising of things,” as Dueñas orchestrates them, is discretely controlled: “The abstract moves into the position of re-moved things” (Hartmut Böhme). The production of abstraction—rooted in its “thing-ness” and new order—appears, however, not as an act of wildness or involuntary disorder: in space and on the surface, it follows a strange geometry. In his work, Dueñas shows us what it could mean to think out the relationships between things in a fundamentally different way.

At the daadgalerie, Dueñas is showing a new site-specific installation called “At Actium and a Tribute to John McCracken.” The title indirectly quotes William Shakespeare’s play “Anthony and Cleopatra” [1623] about the Battle of Actium, which sealed the surrender of the Egyptians to the Roman Empire and brought the treasure of the Egyptians into Roman hands. For this exhibition, Dueñas has weaved together what might seem, at first glance, to be incompatible materials and references. Dueñas uses for example scrap metal from a recycling station in Westhafen or a geometrical form that reflects artist John McCracken’s hybrids between painting and sculpture. These were only just recently exhibited in the Hamburger Bahnhof. Furthermore, the playwrights Samuel Beckett and Harold Pinter are quoted with texts that refer to immediate, personal experiences, to the here and now. With these components, Dueñas develops a formal structure that remains open, nonetheless, for unexpected connotations. Since, at their heart, Dueñas’s productions ask to be empirically proofed through the corporeal presence of the observer in the exhibition space and in relation to the physical qualities of the materials employed.

Since 1990, Danilo Dueñas (born in 1956 in Cali, Colombia) has been a professor at the University of the Andes, the National University of Colombia, and the Jorge Tadeo Lozano University in Bogotà. Dueñas has taken part in numerous international exhibitions, such as the group show “Mesótica” at the Museum of Contemporary Art and Design, San Jose, Costa Rica and “Transatlántica” at the Alejandro Otero Museum of Visual Arts, in Caracas, Venezuela (1995). Most recently, he had solo shows at the Museum of Modern Art and in the Museum of Art of the National University of Colombia, in Bogotà (2001) as well as at the Museum of Contemporary Art in Caracas, Venezuela (2003). In 1999, he received the Johnnie Walker Art Prize. Dueñas is a 2011/12 guest of the Berliner Künstlerprogramm / DAAD.
www.daadgalerie.de