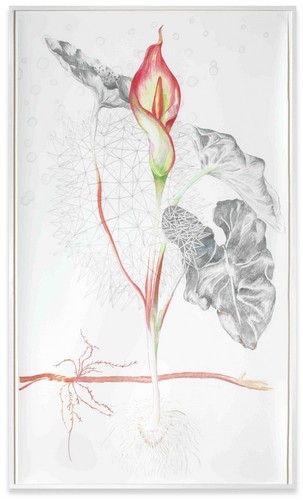 “Nature Is Calling!” presents artistic positions regarding relationships towards the environment and nature. In each work the relationships to nature or to things is defined differently, ranging from semiotic or drawing studies to performative and narrative situations or direct proclamations. Nature, as interpreted by Bruno Latour, is here understood as an equal partner in a dialogue – for example, when considered in the context of climate change.

The large-format drawings of Christine & Irene Hohenbüchler combine natural history representations from Moritz Michael Daffinger (1790 - 1849) and Ernst Haeckel (1834 - 1919) into complex portraitures of plants partly from extinct species which are depicted as meaningful counterparts.

Helen Mirra’s project 33 Bergwanderwege (33 Mountain Trails, 2009) moves within the sphere of action between searching and finding, remembering and recovering. The artist attempts, with the help of these mental processes, to locate and question the “pan-psyche” qualities of each of the selected stones she finds on her extensive hikes.

Douglas Gordon’s half-broken neon sculpture Kaputain (2008/2009) points to a semantic-laconic coinage naming the sad condition of our world. The dialogue with its surroundings proves it to be more than just a good-looking, but, nevertheless, powerless work of mourning.

Here too in Bethan Huws’s wall text Andreas Widmer 2001 (2003) and in the Ready-made Fig. (2003) language and its expressions are used to reflect upon art-making, in terms of content and the production of meaning in art – as well as the relationship of art to life. In both works, nature and our relationship to it move into the focus of aesthetic formulations.

For a poster advertising his 1974 Berlin exhibition “Do the houses turn around you or do you turn around the houses?” – which has been “recycled” for the exhibition “Nature Is Calling” – Mario Merz employs the Fibonacci numbers which often appear in his research into the manifestations of cultural and natural elements. They represent, according to Merz, the laws of nature, like growth, which in Merz’s work stands for both nature and thinking.

In Jennifer Allora & Guillermo Calzadilla’s video projection Sweat Lands, Sweat Glands (2006) a pig is roasted over an open fire – only here the rotary spit is powered by the back wheel of a car. The picture is further charged with the element of music, a song from a Puerto Rican Reggae singer, which plays on non-human social organization forms such as those of bats, ants, and termites.

“When I see a piece of wood, or a dog skull, or a plastic bottle I feel a connection. Each has a political and physical history similar to mine. (...) As you might imagine, I never choose material. Objects present themselves, and I therefore have a responsibility (in part) to present myself in return. But I do feel an urgent need to reclaim – to make reclamation of – 'wasted' things.” Jimmie Durham
www.daadgalerie.de