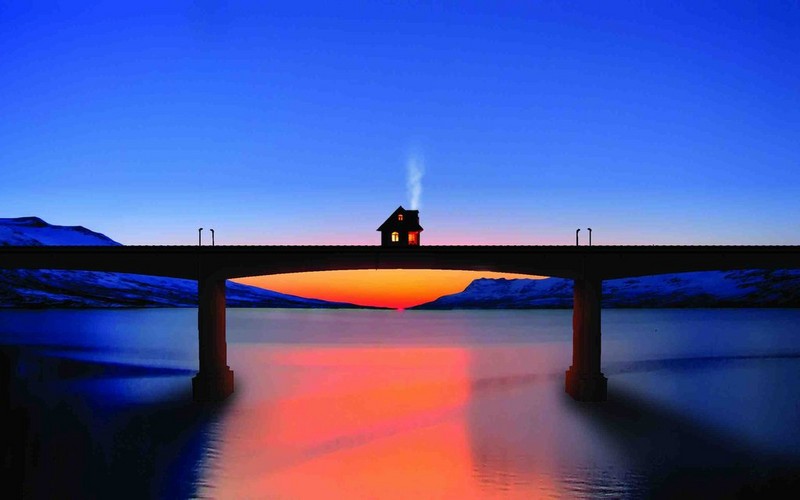 The South Korean artist Do Ho Suh, who lives and commutes between New York, London and Seoul today, investigates the physical and emotional sides of migration with his large-scale installations. Suh uses architectural elements and references of his immediate surroundings in order to reflect on identity and (his own artist) biography in our globalized world. In the daadgalerie, Suh shows a new room-filling installation made out of fabric which makes reference to specific architectural details of Suh’s DAAD apartment in Berlin – and which also gives the exhibition its title. Suh’s textile installations provide the viewer with an encounter of certain architectural and psychological aspects of a space through a physical confrontation with a life-sized sculptural abstraction of it.

Additionally, during his stay in Berlin in 2009, Suh developed designs of “extreme bridges” and mobile, ecologically-sustainable houses in collaboration with experts from various fields such as architects, engineers, and designers. Under the title, “The Bridge Project” these initial bridge designs were exhibited in New York in the well-known “Storefront for Art and Architecture” in 2010. This wide-ranging and continually developing project deals with a fictional architectural utopia of an inhabitable bridge, in which the spatial, temporal, psychological and cultural distance between New York and Seoul is quite literally “bridged” —or overcome. In his detailed yet abstract bridge designs, Suh employs the knowledge of various disciplines including ship building industry, the construction of offshore oil rigs, geopolitics, ecology, geometry, and physics. In the daadgalerie, four exemplary types of bridges will be presented in a 3-D slide projection. These bridges cross the terrain between Seoul and New York through various routes, i.e., through the Antarctic across the Pacific or through Japan. A further animation is based on data collected on Suh’s personal travel routes—with the help of algorithms and confronted with the oceans water currents. Finally, the complete archive of this ongoing project with further bridge drafts, drawings and research material will be presented on a monitor. Suh’s multi-layered project reflects upon, among others, the potential and necessity of interdisciplinary exchange and fundamental questions concerning the awareness of our own living space.

Do Ho Suh (b. 1962, Seoul, South Korea) lives and works in London, Seoul, and New York. He received a BFA in painting from the Rhode Island School of Design and a MFA in sculpture from Yale University. In 2001, Suh represented Korea at the Venice Biennale and in 2010 participated in the Venice Biennale Architecture Exhibition and the Liverpool Biennial. He has taken part in many international exhibitions, including shows at the Hayward Gallery (2009) and Tate Gallery (2011), London; at Albright Knox Gallery in Buffalo (2010/11) and at Storefront for Art & Architecture, in New York (2010) and at the STPI in Singapore (2011). In 2009 Do Ho Suh was a guest of the Artists-in-Berlin programme of the DAAD.
www.daadgalerie.de