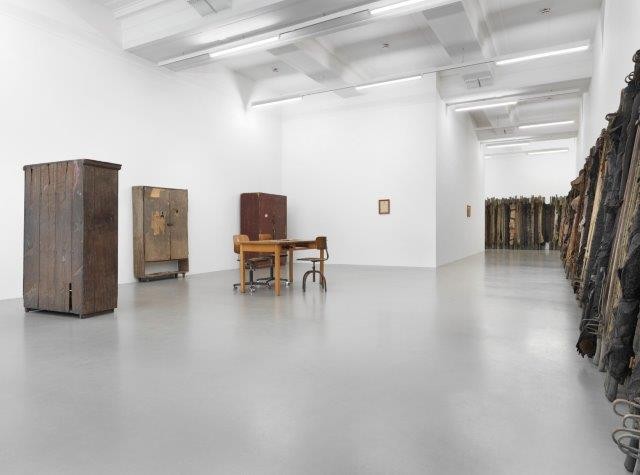 With the exhibition at daadgalerie, his first presentation in Berlin, Ibrahim Mahama directs his attention to the material traces of history and confronts the ostensible linearity of historical narrative accounts with a complex ensemble of historical sources and geopolitical backgrounds.
Documents from parliamentary debates, photographs from the Ghanaian railway archive, school notebooks and public-school textbooks, and annual reports from the Bank of Ghana are temporarily presented in a subjectively compiled archive inside well-worn classroom cabinets. Still in use only recently, the cabinets were traded out by Mahama for newly constructed ones.
Exhibition visitors are allowed to freely access the archive material; provided lists assist in selecting and viewing documents.

The second and most extensive part of the exhibition is an installation uniting materials from varying backgrounds and geographical contexts- “the surviving witnesses of twentieth century failures.” Here, hospital stretchers found in a scrap metal yard in Athens used for transporting wounded soldiers during the Second World War, and which later served as movie props, are presented alongside counterparts of these stretchers made specifically for the exhibition. For these, wooden handles produced by a turnery in the Ore Mountains were patinated and stretched with old household textiles from fish smokehouses located along the west coast of Africa. Blackened by years of use, the material fabric is infused with an intense odor and extends the sensibility of the objects.

The trauma of the war experience inscribed in the material of the historical stretchers is also suggested by the dates integrated into the title: 1918-1945. As in previous works, Mahama expands the production dates of his work, here 2015-2018, into a larger temporal context, incorporating reference dates of relevant content and objects. The time before and after Ghana’s independence (1957), as well as its historical and present-day global networks, raw materials, trade routes, or the development of the railway network, are addressed in the exhibition. Remnants of German and British railway cars, for instance, used in both world wars to transport manganese for steel and weapons production, are also integrated in the installation.
Mahama is interested in objects and materials at the end of the use chain - the exhausted relics of once-functional objects that he transforms and transports into new contexts. This “cross-section of the carcass of history” unites a multitude of collective and individual experiences of diverse social groups.

Ibrahim Mahama (b. 1987 in Tamale, Ghana, lives and works in Tamale, Kumasi und Accra) is well-known to wider audiences through the work he presented at the 2015 Venice Biennale (the covering of a long outdoor corridor in the Arsenale complex), as well as his two contributions to documenta 14 - an enormous floor covering made of jute sacks in Syntagma square in Athens and the blanketing of the Torwache building in Kassel. He has been a guest of the DAAD Artists-in-Berlin Program since May 2017. In early 2018, he developed the work On Monumental Silences for Extra City in Antwerp. He is currently represented with a large-scale installation in the former Valletta (Malta) fish market as part of the Dal-Bahar Madwarna exhibition in conjunction with Valletta 2018, European Capital of Culture 2018. At the beginning of May his exhibition Coal Market opens at Schloß Strünkede in Herne.
www.daadgalerie.de