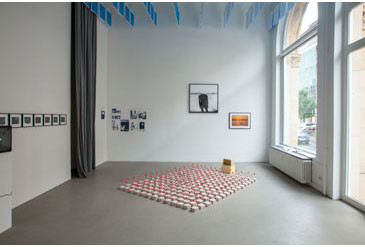 The exhibition "Being an Island" (Inseldasein) begins by looking at the island as an idea so as to then go on to examine real islands. Central to this is on the one hand the metaphorical perception of a political space – derived from the context of the geopolitical enclave called West Berlin between 1949 and 1990 – and, on the other hand, also the state of being an island in the geographical sense as well as a real socio-political existence of islands and island states today.

‘This city is a prime example for isolation. It is an island in which one lives and forgets about the wall. The strange thing is that everybody forgot about the isolation,’ wrote Nan Hoover, a guest of the DAAD Artists-in-Berlin Program, about West Berlin in 1980. When people talked about West Berlin, they commonly made use of the island metaphor. As an ‘island’ isolated by the Wall, the city thus fit within the symbolic imagery of that time. Thanks to their outside perspective, many of the international DAAD guests brought with them an incisive view on the West Berlin reality, and commented on its isolation, separation and loneliness, but also its particular autonomy and specific freedoms in their work. The exhibition Being an Island presents various works by former guests of the DAAD Artists-in-Berlin Program that were created within this context. Although the works of the DAAD guests are not always characterised by the concept of seclusion and isolation, they nevertheless sketch a picture of a particular whole that was shaped by political reality.

Before the backdrop of the fact that the 'the metaphorical idea of the island is so powerful that it can be deployed in the absence of even the slightest reference to the reality of islands' (Peter Hay), the exhibition moves from ‘the island’ to islands and turns its gaze to islands as real places. Approximately ten per cent of the world’s population lives on islands with their own individual history as well as specific socio-political realities. Their living spaces – islands – are today under great ecological pressure and find themselves confronted with demographic, social and economic issues that result from their special situation. At the same time, islands are subject to the mechanisms of the globalised world – they represent tax havens, offshore economy and tourism oriented toward distant destinations. If one ignores these issues, one reduces them to colourful tropical paradises of a roughly abstract or metaphorical character.

How can we, therefore, speak about islands today? In more recent scholarly island studies, one can observe a shift in the discussion – away from the concept of seclusion (which originates from the remote spatial situation of islands and disregards their special social and cultural characteristics) and towards the idea of the living and multi-dimensional concept of ‘islandness’. The second part of the exhibition examines this idea by bringing together international artists who live and work on real islands, and in island states, or are involved in intensive examinations of island realities today.
www.daadgalerie.de