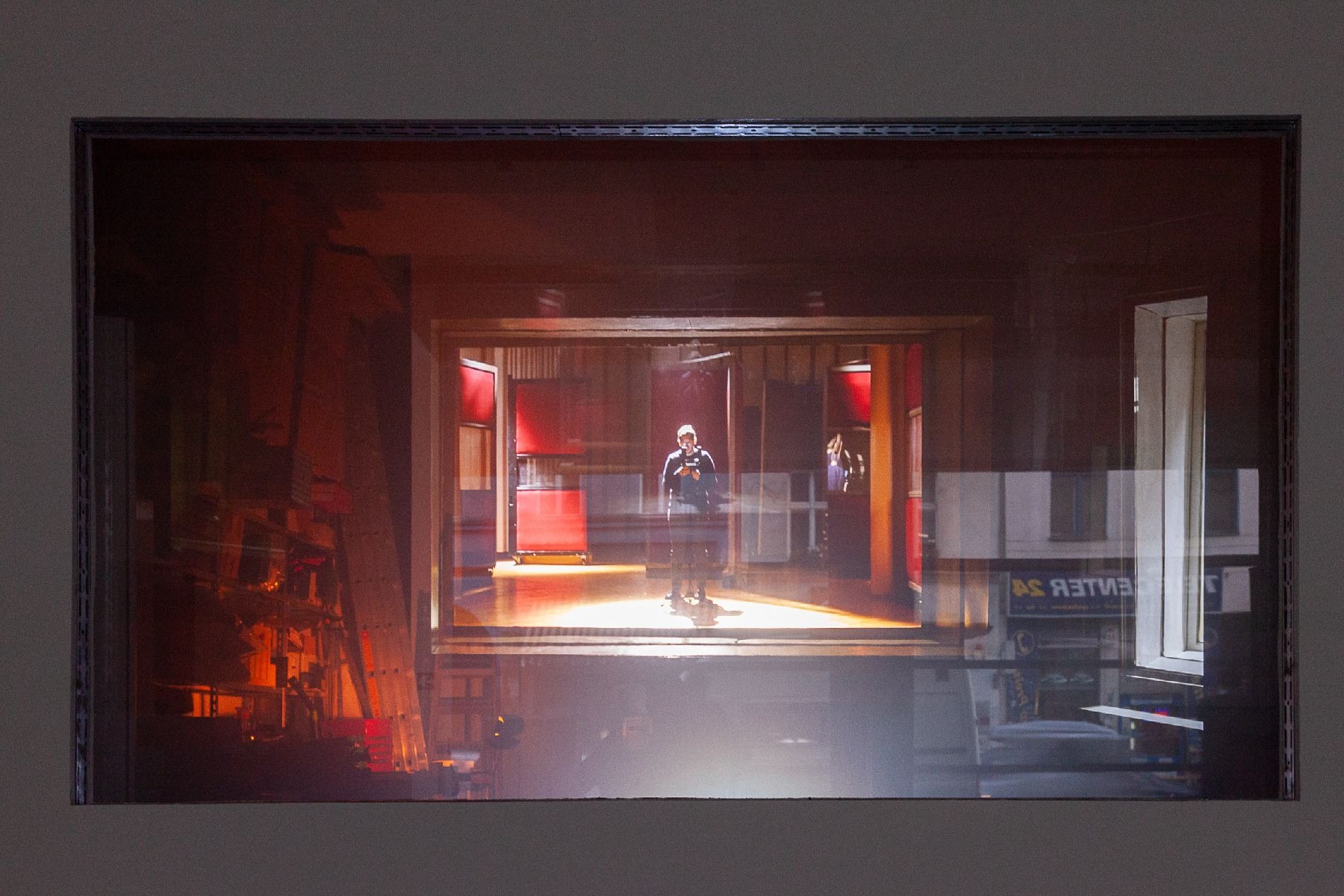 The starting point for the audiovisual installations and performances of Lawrence Abu Hamdan is the investigation of auditory consciousness and memory, focused primarily on highly political contexts. In addition to his artistic work, Abu Hamdan often collaborates as a sound expert with Forensic Architecture, a Goldsmiths College, University of London-based independent research agency that uncovers human rights abuses using creative scientific and technical methods and which was nominated for the Turner Prize this year. In his own artistic work, which also incorporates aspects of his Forensic Architecture research, Abu Hamdan presents abstract scenarios that analyze the acoustic properties—the reverberations of state, structural, or industrial violence—of surveillance mechanisms or propaganda. Various media and methods are employed, including performative lectures, sound and video installations, video essays, sculptures, or the visualization of scientific data in the form of drawings or graphs.

Walls and partitions increasingly determine the complex reality of our lives in an era of transparent society and simultaneous isolation and the demarcation of borders. Abu Hamdan deals with these themes from an acoustic perspective in the new video essay Walled Unwalled (2018), which was shot inside the former sound-recording studios of the GDR broadcasting network at Funkhaus Berlin in Nalepastr. The moveable walls and various material surfaces of the historical sound-effects studio form the ideal setting for Abu Hamdan’s essayistic analysis of sound absorption and reflection and the ability of walls and partitions to transmit sounds using various political case studies: referenced is the case of Danny Lee Kyllo vs. the United States, the murder trial of Oscar Pistorius in South Africa, and Abu Hamdan’s investigation into the Syrian Prison Saydnaya, as well as the role of the American broadcaster Radio Free Europe, which was directed at listeners on the other side of Iron Curtain from Munich during the Cold War.

Walled Unwalled primarily features the artist himself, standing behind a microphone inside the sound studio and reading a text in the manner of a performative lecture. His lecture is filmed from the outside, through the large windows of the three, formerly ultramodern sound-effects studios, interconnected by movable walls and doors, in which “any kind of acoustic space could be produced” (Abu Hamdan). In the background, the sound-absorbing wall elements of the studios are moved around, doors are opened, and rooms are walked through. The film and sound samples played during the lecture are projected onto the windows of the studio. This demonstrating and testing of the acoustic properties of the walls, their insulating and reflective function, and the layering of the images on the windows are taken up again in the presentation of the video at the daadgalerie. Here, the video image is projected from inside the gallery’s storage space as a rear projection onto a glass pane installed in the wall that connects the exhibition and storage spaces like a window. As a projection surface, the glass is translucent so that the video image, visible parts of the storage space, and the light of the projector and the reflection of the street façade are superimposed on it.

The simple intervention in the exhibition space—a reference to the institution-critical art of the 1970s and 1990s—demonstrates how Abu Hamdan’s approach combines politics, research, and activism with a strong sense of form in an intriguing way.

One of Abu Hamdan’s best-known works, created in collaboration with Forensic Architecture, was the investigation of the circumstances surrounding the 2014 shooting of two youths by Israeli soldiers in the West Bank. Using a detailed analysis of the recordings of the shots fired, the official Israeli version of the crime was refuted. In his exhibition Earshot (2016, Portikus, Frankfurt), Abu Hamdan again dealt with the incident in the form of a video and a photo installation, using methods of visualizing sound.

In 2016, Amnesty International commissioned Forensic Architecture, working in collaboration with Abu Hamdan, to reconstruct and analyze operations inside a Syrian prison for political prisoners of the Assad regime. According to Amnesty, more than 13,000 people have been murdered at the Saydnaya military prison north of Damascus since protests began in Syria in 2011. These processes came to light only as a result of Amnesty International’s involvement. Forensic Architecture and Abu Hamdan interviewed former prisoners and utilized techniques from architecture including 3D modeling or echo profiling. The results of the investigation were submitted to the German Public Prosecutor’s Office in 2017.

With the sound installation Saydnaya (the missing 19db) (2017), Abu Hamdan presented in a darkened room at the 13th Sharjah Biennial in 2017 the findings acquired from the acoustic analysis of the prison, based on the auditory memories of witnesses who ultimately provided evidence that mass-scale executions had taken place in Saydnaya. Individual observations of the artist, excerpts from witness testimonies, and sound samples from various contexts are combined to form an impressive audio piece, which, beyond the forensic evidence, works to create awareness of the auditory perception of the world. The honing of auditory senses and their often neglected potential is just as important a theme as the fallibility of and the leeway for interpreting auditory perceptions. Abu Hamdan’s work on the Saydnaya project is currently being presented at the Chisenhale Gallery in London.