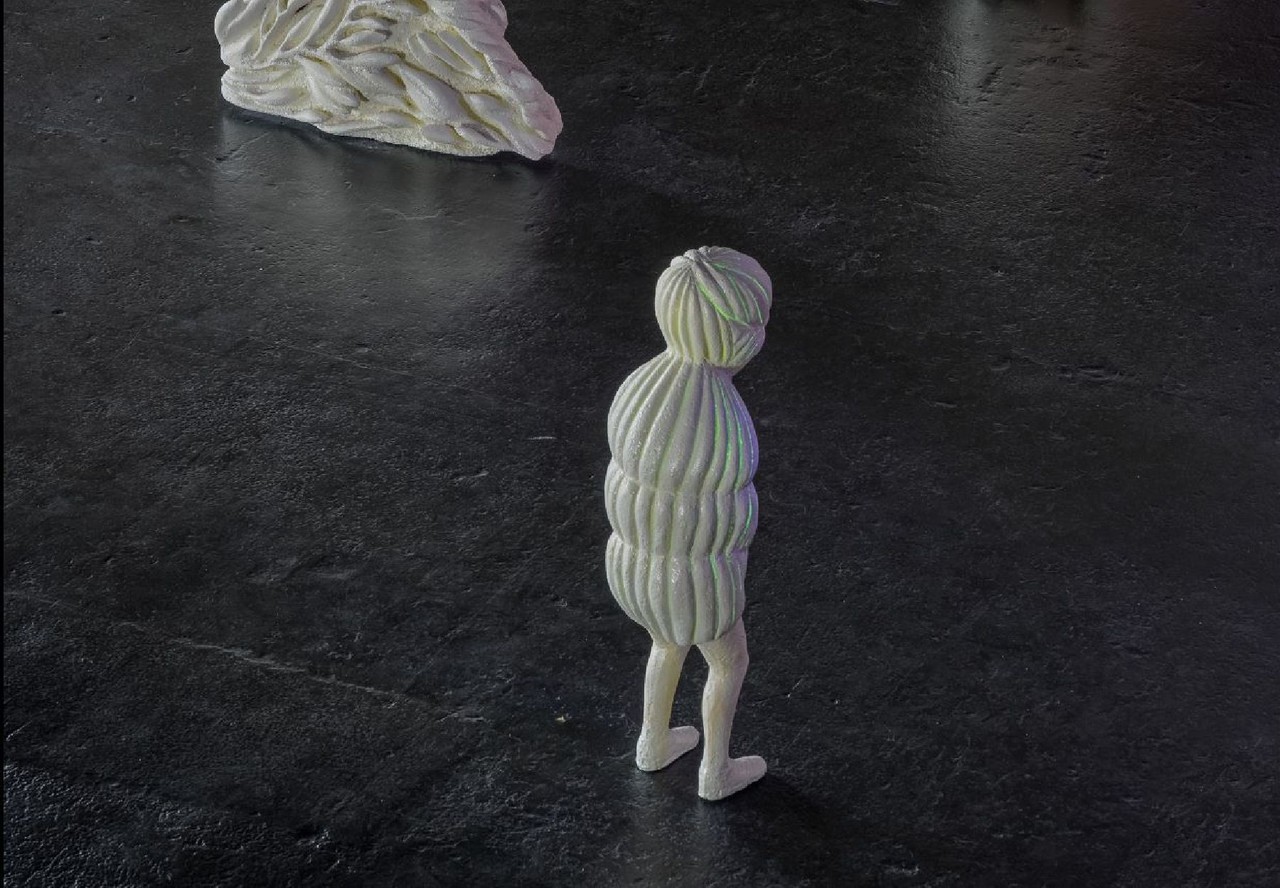 Naufus Ramírez-Figueroa’s exhibition centers on a new series of sculptures. Created during his residency in Berlin in 2016-17, the series was first shown at the CAPC musée d’art contemporain de Bordeaux and is now presented in the context of a site-specific installation titled The Green Ray, the artist’s first solo exhibition in Berlin.

Naufus Ramírez-Figueroa works primarily with the mediums of performance, sculpture, drawing and video. Incorporating a wide variety of themes such as architecture, folklore, or botany, he creates forms or images with his works that reference the colonial history of Latin America and its far-reaching consequences to the present day. For his renowned performance, A Brief History of Architecture in Guatemala, from 2010, (Breve Historia de la Arquitectura en Guatemala) the artist had performers in minimalist, cardboard model costumes representing three characteristic architectural styles—a Mayan temple, a colonial-era church, and the modernist Bank of Guatemala—come together to produce a destructive mess.

Ramírez-Figueroa’s sculptural work is created in parallel with and often intersects his performances. Working with color and lighting effects to stage his Styrofoam sculptures, he creates suggestive theatrical landscapes humorously reminiscent of a science-fiction or makeshift stage-design aesthetic. Evoked at the same time are themes such as expulsion, identity, or Guatemala’s colonial legacy.

In bringing together organic forms and figures in the exhibition, Ramírez-Figueroa draws a relationship between the ecological and social consequences of agricultural monopolies today and the botanical and zoological taxonomy of the Swedish natural scientist of the Enlightenment, Carl von Linné. Among other things, Linné scientifically and systematically classified the findings of several European botanical expeditions to colonial Latin America. He corresponded extensively, for example, with Spanish botanist José Mutis, who for years studied the flora and fauna of South America.

Accordingly, the sculptures in the exhibition suggest botanical references that can also be read politically—in terms of Central America’s colonial and economic history. Recognizable are the leaves of the vanilla orchid, cacao fruits and beans, banana trees, coconuts, and exotic indoor plants such as the Monstera deliciosa. Other floral forms are reminiscent of ancient plants chiseled in stone. The low durability value of the easy-to-cut polystyrene underscores the backdrop-like character of Ramírez-Figueroas’s sculptures. They are painted various shades of white with epoxy resin infused with pigments and fiberglass powder. A green grid extending across the entire floor of the exhibition space and a green and cold-white lighting set the stage for a closer examination of the individual sculptural elements, which seemingly defy classification and an obvious narrative.

Naufus Ramírez-Figueroa (born 1978 in Guatemala City, raised in Vancouver, Canada, lives and works in Guatemala City and Berlin) participated in the main exhibition of the 57th Venice Biennale in 2017 with the installation The Third Lung (2017) and in 2016 with the work Heart of the Scarecrow in the 32nd Sao Paulo Biennial. The same work is currently being exhibited in the group show A Universal History of Infamy at LACMA in Los Angeles. In 2017, Ramírez-Figueroa presented performances at the Guggenheim Museum in New York as well as the Vienna Festival, and had solo exhibitions at the CAPC Bordeaux and Kunsthalle Lisbon. He also received the Mies van der Rohe fellowship from Kunstmuseen Krefeld.