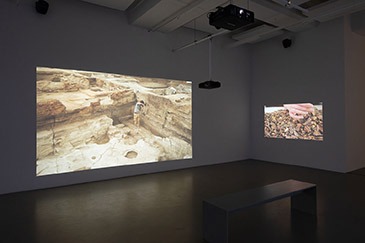 The daadgalerie presents the video installation The City (2018) by Rossella Biscotti in Germany for the first time. In this work Biscotti investigates into the temporal dimensions of history and their possible connections with the present. Encompassing five video channels and eight audio tracks the artist creates an impressive work, yet it carries a subtle narration about the archaeological site Çatalhöyük in today’s Konya in Turkey. Around 9,000 years ago a Neolithic settlement was founded there; today it is regarded as one of the first urban centers of the world. In the course of her research as part of the team, the artist spent several months on site and documented the working and living community during the excavations. In an associative montage of recorded video and audio material, Biscotti weaves together a narrative that links the ways of living and organisation of a very early form of society to a contemporary community and the ways of working together at this archeological site. Time and again, incidents within this narrative occur where it is uncertain when in time these actions are happening, thus leaving us as viewers to connect the words and images with imagined realities both now and then. Only the closure of the excavation site after the attempted military coup in Turkey in 2016 brings us back to the here and now. This inclusion of a political situation from the recent past also points to the power relations that determine social structures and forms of community, future, past, and present. The significance of history, its questionable official narrative, and alternative historiography are recurring themes in Biscotti’s work, often guided by extensive research and artistic forensics. Her contemporary approach to remnants of the past results in The City revealing a subjective and political analysis of our being in the world.

Rosella Biscotti (born 1978 in Molfetta, Italy) is a current fellow of the DAAD Artist-in-Residence Program. Her work has been shown on an international level in many solo and group exhibitions across various contexts.

The City is produced by Protocinema, Istanbul/NewYork with support from Mondriaan Fund and NEARCH Project.