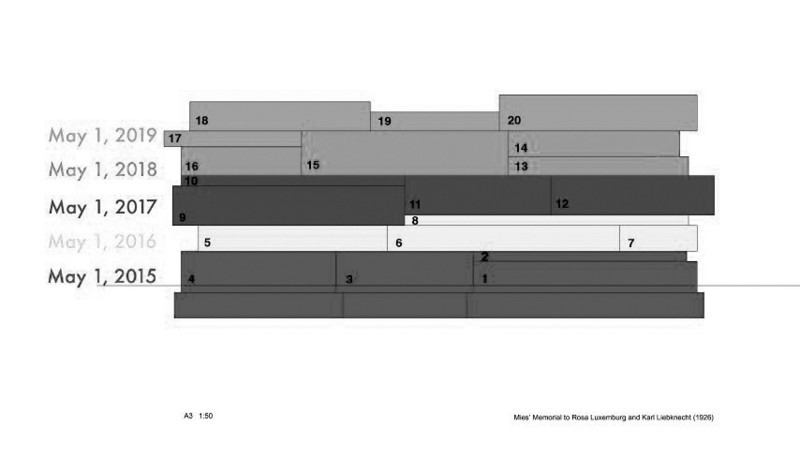 Sanja Iveković has been conceiving and executing projects for the public sphere since the 1970s. A recurrent theme of her work involves the forms and context of official memory cultures. With her proposal to reconstruct Ludwig Mies van der Rohe’s 1926 “Monument to the November Revolution” for Rosa Luxemburg, Karl Liebknecht and the revolutionaries of the workers’ movement from today’s vantage point, Iveković challenges the dominant politics of remembrance and harks back to the monuments’s heavily-contested history, echoes of which could be heard long after the it was destroyed in 1933.
Iveković’s project “Monument to Revolution (after Mies)” (2014) borrows its form and symbolic order from Mies van der Rohe’s monument but it privileges collaboration and participation, and aims to reflect these values through its process-based method of construction. “The idea is to think beyond the confines of nation-state and involve a large number of European and international anti-fascist, workers’ and leftist organisations, labor unions, women’s organisations, as well as all interested individuals in the process of gathering the building blocks for the piece” (Sanja Iveković).

The daadgalerie will present Iveković monument project within an exhibition of new works titled “Ich war, ich bin, ich werde sein!” (“I was, I am, I shall be!”). Like much of her work, especially the pieces created for public spaces, her monument design functions on several levels; while it can be considered an architectural project, it also serves to catalyze a debate that goes far beyond local monument politics.
In line with the broader scope of this undertaking, the exhibition presents Iveković’s monument design alongside some of the reflections, research, and documents that continue to shape the project. Centered on the history of Mies van der Rohe's destroyed monument, Iveković’s project uses the original monument as a research object situated within the historical context of left-wing revolution. In order to shed light on this context, the exhibition is supplemented by a timeline (“Timeline (M.R.W.)“, 2015) tracing the history of Mies’ memorial – throughout the shifting ideologies of and practices for the politics of memory, especially in light of Rosa Luxemburg as a disquieting Marxist thinker – and is juxtaposed by an extensive chronology of left-wing revolutionary movements and uprisings, as well as women’s suffrage, from 1910 to the present day. A new video installation („We will be victorious if we have not forgotten how to learn“, 2015) created especially for the exhibition provides the images, sounds, and ideas for the timeline, with excerpted archival material documenting revolutionary movements and passages from Rosa Luxemburg’s “Letters from Prison.”

The exhibition’s title “I was, I am, I will be!” is a line taken from an 1851 poem by Ferdinand Freiligrath called “The Revolution,” which Rosa Luxemburg had quoted in a text she composed a few days before being executed: the now-famous line reads, “In the words of the revolution: I was, I am, I will be!” The complete quotation reads as follows: “Your so-called ‘order’ cannot hold. Tomorrow, the revolution will ‘rise up with fury,’ and you will shrink in fear when our call rings out: ‘I was, I am, I will be!’” – “Die Ordnung herrscht in Berlin,” printed in The Red Flag, Issue number 14, January 14, 1919.
Iveković uses the original work as well as her own monument proposal as a vehicle to examine and shed light on latent conflicts and contradictions, including the desire for community and the need to resurrect a revolutionary memory, as implied in the series of drawings “Waiting for the revolution (till tomorrow)” (1992/2015).

The accompanying symposium “Memorial For(u)ms – Histories of Possibility” is to take place concurrently from July 3-4, 2015. It will examine what discursive or aesthetic forms are appropriate for an unrealized revolution, and consider what values a monument reconstructed in the present-day might stand for. Against the backdrop of Rosa Luxemburg’s canonical choice between “Reform or revolution?” as well the events of the November Revolution in 1918-19, discussions will focus on the contradictory iterations of a revolutionary memory that is shaped by martyrdom and heroism, as well as optimism and melancholy.
Sanja Iveković, born in 1949 in Zagreb (Yugoslavia / Croatia today), lives and works there. She has participated in numerous international biennials and major exhibitions, such as documenta 8 (1987), 11 (2002) and 13 (2012) and comprehensive institutional solo exhibitions, for example in the South London Gallery (“Unknown Heroine“), the MUDAM, Luxembourg (“Waiting for the revolution“), 2012, at MoMA, New York (“Sweet Violence“), 2011, the Van Abbemuseum, Eindhoven (“Urgent Matters“) and Muzeum Sztuki, Lodz (“Practice Makes The Master“), 2009. In 2015 she was nominated for the Artes Mundi Prize. In 2005 Sanja Iveković was a guest of the DAAD Artists-in-Berlin Program.
www.daadgalerie.de