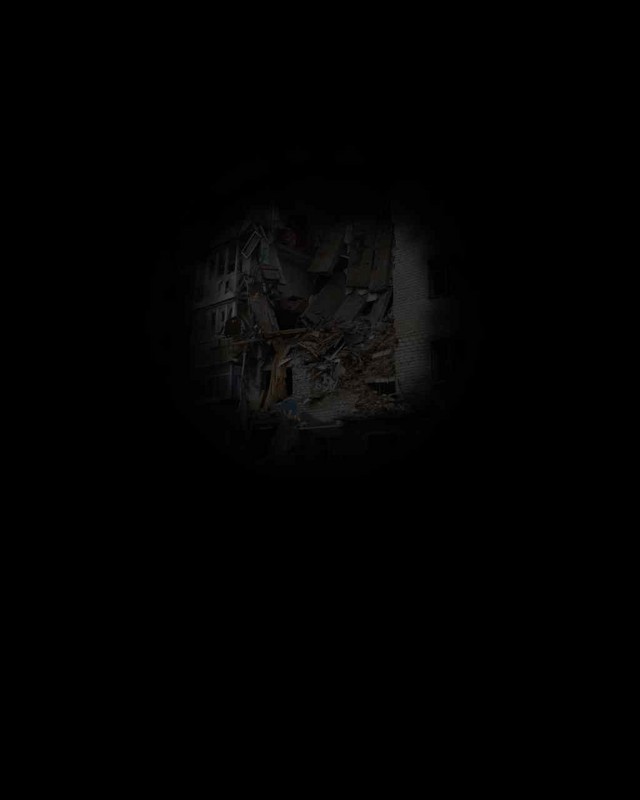 Subsequent to Martha Rosler and Josh Neufeld's banner Pull Up Those PIIGS (2011) and the installation Tamasha by N S Harsha (2013) the collaborative project Blind Spot by the visual artist Mykola Ridnyi and writer Serhij Zhadan (both live in the East Ukrainian city of Kharkiv) will be shown from September 30th.

A large-scale banner reveals a detail taken from a press photograph depicting rubble of a destroyed building in Luhansk, which lies in Eastern Ukraine. The work is part of Ridnyi’s latest photographic series, in which press photographs of the armed conflict in Ukraine are interlinked with the phenomenon of gradually going blind and a resulting narrowed field of vision: the imagery is almost completely obscured by black ink. “It can begin like a small gradually expanding black dot or like a narrowing tunnel that devours vision until everything is erased. This inability to see is also like a human self-defense mechanism that produces voluntary blindness against escalating violence.” M.Ridnyi

At street level, Serhij Zhadan expands on the theme of war destruction with his essay The Ruined Museum, printed in its Ukrainian original as well as in Russian, German and English translation. The essay recalls the bombing of a museum in Donetsk: “Understandably, we don’t pay much attention to ruined buildings, when every day we hear about the death of soldiers and civilians, when every day we see the names and photos of those killed in the war. Blown up bridges and wrecked train stations are only the background for this bloody summer.” S.Zhadan

A publication with new prose poetry by Serhij Zhadan and the complete photographic series Blind Spot by Mykola Ridnyi will be released in November and consequently presented with an artists‘ talk at KuLe e.V.. Current information can be found at: www.daadgalerie.de

Mykola Ridnyi (*1985 in Kharkiv, lives in Kharkiv) works as an artist and curator, he is co-founder and member of the Ukrainian artist collective SOSka group. Most recent exhibitions include 2014: Shelter at Visual Culture Research Center in Kiev (solo exhibition); Ten thousand wiles and a hundred thousand tricks, curated by WHW as a part of Meeting points 7, Institute for African Studies, Moscow; Deprivation, curated by Monika Szewczyk, Arsenal Gallery, Bialystok; The Ukrainians, curated by Bettina Klein, daadgalerie, Berlin (group exhibitions); most recent curatorial project: After the Victory, CCA Yermilov Centre Kharkiv, 2014.

Serhij Zhadan (*1974 in Starobilsk / region of Luhansk, lives in Kharkiv) is a novelist, poet and translator. He was a guest of the DAAD Artists-in-Berlin Program in 2010. Recent publications in English translation include: Big Mac and Other Stories, 2011; Anthem of Democratic Youth, 2006; The History of Culture at the Beginning of the Century, 2003, Anarchy in the UKR, 2005. In addition to his literary work Zhadan regularly performs with his band Sobaky w kosmossi (translated: Dogs in Cosmos).
For his novel The Invention of Jazz in Donbass, published in German by Suhrkamp in 2012, Zhadan will receive the Brücke Berlin-Preis on October 1st at the Deutsches Theater Berlin.