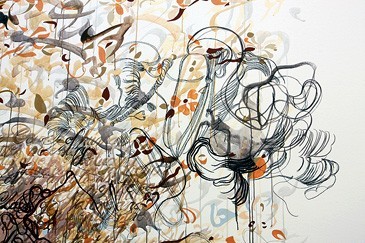 Shahzia Sikander became known through her unconventional application of traditional indo-Persian miniature painting. To date, her work has equally served as a revivification and transformation of the visual and cultural material that belongs to traditional Hindu and Muslim schools of painting. Mixed with various references, e.g. of Western pop-culture, she transposes her repertoire of motifs into different media, from murals to animated videos. Playfully, and with a unique experimental drive she investigates cultural points of view regarding labour and beauty, virtuosity and formalism as well as abstraction and narration. Thus, the prevailing categories, such as 'tradition' and 'avant-garde', or 'modern' and 'contemporary' are called into question.
For the exhibition at the daadgalerie the artist will make a new mural. Her playful approach to scale expands form and format of the miniature. The frame and self-referentiality of miniature painting are the point of departure for the artistic freedom that connects old and new. In addition, Sikander will show a series of drawings – 12 portraits – and two videos that were completed during her stay as a resident of the Berliner Künstlerprogramm / DAAD. For the first time the artist, who has been living in New York since 1994, employs a documentary method in her work. In Laos Shahzia Sikander made portraits of monks and novices that will be shown together with video-portraits of the same monks. The portraits show surfaces that resist the uniformity, anonymity as well as the touristic view. This series ties in with the general preoccupations of Sikander’s work, like the inconsistency and instability of medial representation.

Shahzia Sikander was born in 1969 in Lahore, Pakistan. In 2005, she took part in the Venice Bienniale and in international exhibitions in Seville, Johannesburg, Taipei, Istanbul and on the Whitney Biennial in New York. Her most recent exhibitions include the Irish Museum of Modern Art, Dublin, the Museum of Contemporary Art, Sydney (2007–2008) and the Ikon Gallery in Birmingham (2008). In 2009, the artist will receive the Creative Arts Fellowship at the Bellagio Center (Rockefeller Foundation). Interstitial: 24 Faces and the 25th Frame is the first exhibition of the artist in Germany.

In cooperation with the Ikon Gallery, Birmingham, a catalogue will be published.
www.daadgalerie.de