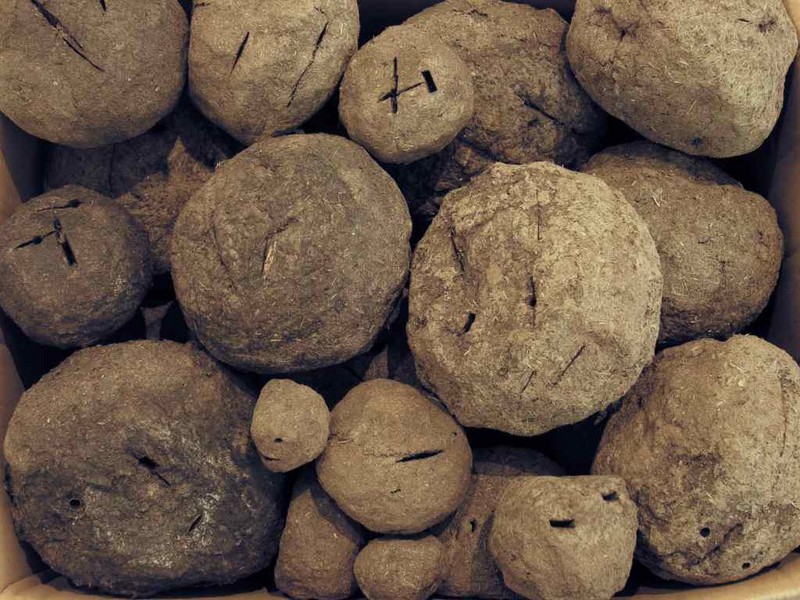 With the exhibition Of All People the daadgalerie presents Sheela Gowda’s first institutional solo show in Germany. The Indian artist is predominantly known for her sculptural work, which references local and political contexts by combining both traditional and modernist forms and processes. In recent years Gowda's work has been presented regularly in major exhibitions throughout Europe. Her installation And... was a key work at documenta 12 (2007): a twine of chords, dyed red with kumkum*, become lines in space through which the viewer can pass.

Sheela Gowda became known in the 1980s for her figurative painting. This was followed by a period of increasing abstraction in her installations and sculptural works with a strong focus on materiality. Expressing both sociopolitical and psychological aspects Gowda's work reflects her familiarity with Indian as well as western culture. The exhibition Of All People uses a number of leitmotifs and artistic strategies that have informed her work over many years: the use of found materials researched in depth, and a juxtaposition of representation and abstraction which emerges through the creation process.

Of All People (2011) is the title of an extensive installation made of fragments of doors taken from modest Indian houses, an upside-down table, and thousands of small wooden votive figures. Large numbers of these handcrafted figurines are sourced from particular shops in India; in the installation they populate a brightly coloured landscape of architectural elements. The work Stock in the second room consists of several cardboard boxes that contain balls of cow dung the artist has coarsely marked and pierced, which reads as simplified facial expressions. In India this organic material is a multi-purpose resource used, for example, as fuel and floor covering, as well as in rituals.

Sheela Gowda, b. 1957 in Bhadravati / Karnataka, India, lives and works in Bangalore. In 2013 she was a guest of the DAAD Artists-in-Berlin Program and has shown extensively in group and solo shows in numerous international institutions, among them:

*Kumkum is a bold red pigment traditionally made from turmeric or saffron. It is used in various rituals in India and is applied to the forehead as a purification ritual.
www.daadgalerie.de