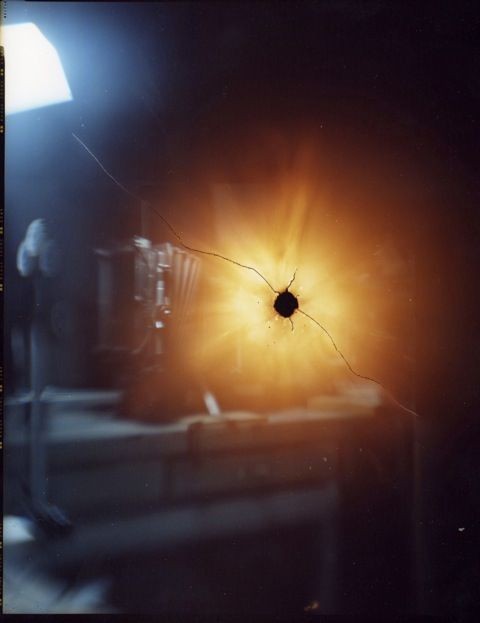 British artist Steven Pippin was a guest of the DAAD Artists-in-Berlin Program in 1997. The following year his exhibition in the daadgalerie, Global Warming, featured exclusively sculptural works. Pippin is known by a wide audience primarily for his early pinhole camera experiments. Since 2010 he has worked on two integrated photo series, presented now for the first time in Germany in an exhibition titled in Camera.

Building on his experimental photographs made using everyday objects reconstituted as pinhole cameras, the two current series Non Event and in Camera result from the destruction of analogue cameras. The prints are images of the last photographs taken by these cameras – images that record the moment in which the bullet of a gun enters the camera and ruptures the negative. The infinite number of possible photographs a camera can take (something Pippin regularly questions the sense of in his writing) is brought to an abrupt end by the intrusive act. Despite the high level of technical precision required to realise the project, it is ultimately the impossibility of exercising complete control in the moment of the camera's destruction that makes the photographs so fascinating. The colour prints show abstract fragmented forms, broken structures, which sometimes resemble organic natural forms, but in their artificial colour also point to the chemical process that generated them. On a number of the images it is possible to see the bullet that smashed the camera, sometimes in a momentary blur or, as in the photograph Deep Field, as a lone planet in a universe of bursting particles:

“The Deep field Hubble images have this unending depth (but that comes by the fact that the depth is truly infinite) and therefore lends its name to this photograph. After studying the image for more than a year I realized there was another reason the image seemed somewhat familiar. The other visual connection here is produced in our eye at some moment between sleep and waking. We ‘see’ a similar type of image in our retina during this time as the light cones of the retina are stimulated by residual thoughts and the action of light resulting in an effect that equates well with the infinity and vastness of space and that of the mind.” S.P.