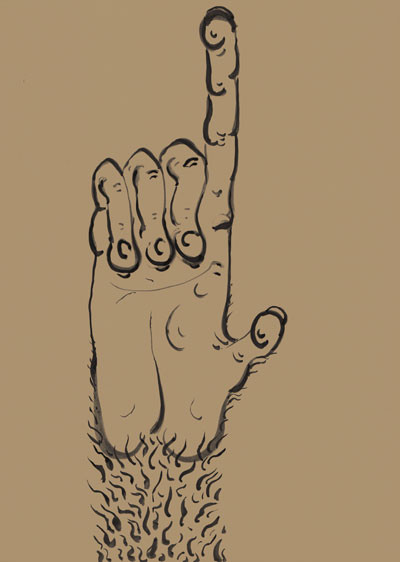 N S Harsha is known around the globe for his paintings, drawings and installations, as well as for numerous site-specific and local projects. Through a vocabulary of poetic-conceptual forms, Harsha marries political and social references to popular and traditional art forms. His detailed images depict microcosms of life, linking traditional and local elements, such as the portrayal of rituals, with images and topical issues faced by humanity today. These links offer a subtle and often humorous commentary on present times.

The “Tamasha” installation or group of sculptures depicts a pack of monkeys that are in the process of scaling and/or storming and occupying the building at Auguststrasse 10. “Tamasha” in Hindi, Urdu or Marathi is a common term that refers colloquially to a large show, performance or celebration, as well as to commotion, tumult, or bustle. The monkey sculptures, which are rendered with drawing-like definition, call to mind Gray langurs, also called Hanuman langurs after the popular Hindu god in the form of a monkey. These monkeys are considered to be sacred animals, but are also notorious as great plunderers who live in groups and conduct fierce struggles for power. In N S Harsha’s installation the long tails of the monkeys stretch over the façade of the building like a net and are intertwined with each other and tangled up at the ends.

Allusions to the veneration of the sacred monkeys and to the plague of monkeys in real everyday life in India are thus combined with the old German myth of the rat king. This rare phenomenon denotes groups of house rats whose tails become knotted together (e.g. as a result of hibernating in structures that are too cramped), which, according to legend, supposedly also caused the tails of live rats to actually grow together. Discoveries of rat kings were interpreted as an omen for impending plagues and illnesses. Furthermore, the spine-chilling forms have inspired numerous artistic treatments. The image of society that is implied by Harsha is based on social groups that publicly manifest themselves through play and group dynamics as a collective force resulting from spatial and geographic dependencies, entanglements, power struggles and tumult.