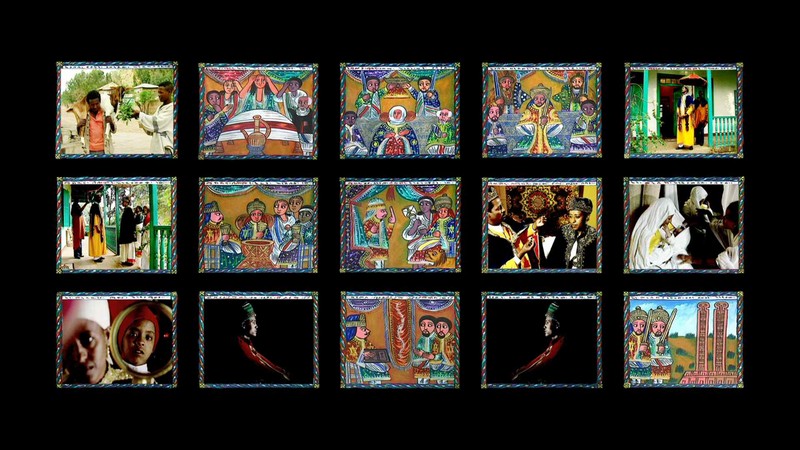 Since the 1980s Anglo-Ethiopian artist Theo Eshetu, resident in Rome and Berlin, has created films and installations that combine the formal language of experimental film – rapid cutting and a rhythmical flow of images – with anthropological themes such as the meaning and representability of rituals, symbols and myths. Eshetu's work points to a complex network of diverse cultures, forms of cultural hybridity, and the collision of opposites.
To coincide with the Berlin International Film Festival the daadgalerie presents Eshetu's most comprehensive video installation to date, The Return of the Axum Obelisk (2009, 26 min., loop), for the first time in Germany.

The video installation The Return of the Axum Obelisk (2009) intensifies experimental film's search to combine form and content. Across 15 monitors Eshetu shows the return of the “Roman” Axum Obelisk to Ethiopia more than 70 years after Mussolini had it shipped to Italy as spoils of war. Building on his own film documentation of this extraordinary incident of restitution, Eshetu has created an elaborate work whose compositional complexity is a small-scale honoring of the technical feat of engineering involved in reinstating the towering obelisk. The high point of the installation comes when the images on all 15 monitors merge into one as the final segment of the obelisk is put into place and the Italian and Ethiopian workers congratulate one another. At the same time Eshetu also addresses the theme through traditional Ethiopian painting, using filmed modern reenactments of the origin myth of the story of the Queen of Sheba who reigned over the region surrounding Axum – to present the obelisk's reinstallation as a “ritual ceremony of transformation.”

Eshetu created the digital photo collage Disco Africa after taking part in an exhibition organised by the Humboldt Lab at the Ethnographic Collections in Berlin-Dahlem. Eshetu had installed a disco ball in one of the museum's rooms – an obviously incongruous object in such a setting – in order both to point out the strongly entertainment-oriented nature of what will be the museums move to its new location in the Humboldt Forum, and to pose the question as to what can or should fit into the canon of an ethnographic collection. In the photograph the borders between countries and states have disappeared and the continents are covered with mirror-ball tiles, which for Eshetu embody the vision of “a nation under one groove”.

In the second exhibition room the Christian rituals in The Return of the Axum Obelisk are counterposed with an Islamic ritual in the video installation The Festival of Sacrifice (2012, 16min, loop). Across six screens we see the ritual slaughter of a goat at the end of Ramadan, filmed by Eshetu on the Kenyan island of Lamu. Through multiple mirroring the extreme footage is sublimated into a series of images that resemble traditional Islamic ornamentation. The skilled dissection of the animal body is reflected in the kaleidoscopic dissolution of the video images.

Masked Self Portrait is part of an ongoing series of photographic self-portraits in which the artist projects images of statues, masks or portraits of other people onto his own face. The series began in 2004 when Eshetu used images from the exhibition catalogue for the Festival Mondial des Arts Nègres (1966), the first exhibition which he visited as a child in Dakar.

Theo Eshetu (born 1958 in London) lives and works in Rome and Berlin. His works have been shown at the Venice Film Festival, the London Film Festival, the New York African Film Festival, the 2nd Video Biennial in Fukui, Japan, and many more. His films have won numerous awards, for example at the Berlin Video Festival, the International African Film Festival in Milan or the Festival dei Due Mondi in Spoleto. Eshetu has exhibited at the ICA, London, the Stedelijk Museum, Amsterdam, the National Gallery of Canada, the Martin Gropius Bau, Berlin and the National Gallery of Cape Town, South Africa among others. In 2011 his works were shown at the Sharjah Biennial and the Venice Biennale. In 2012 Theo Eshetu was a guest of the DAAD Artists-in-Berlin Program.
www.daadgalerie.de