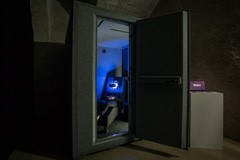 "The Program" is a new installation by Yutaka Makino which involves an isolation chamber, a spatial configuration for one person in which light and sound from the outside are cut off, as well as custom made equipment particularly designed for this piece.

In the isolation chamber, the seated visitor receives visual, auditory and tactile stimuli which trigger complex interactions of the perceptual processes which affect the visitor’s perception in a highly abstract, unfamiliar way.

By disrupting, suspending or reconfiguring perceptual habits, "The Program’s" merging of sensory stimuli may reveal instabilities in human perception. The piece provides a setup for experiencing and reflecting on the principle of multisensory integration, the interaction and interdependence of the different sensory modalities that our perception is based on.