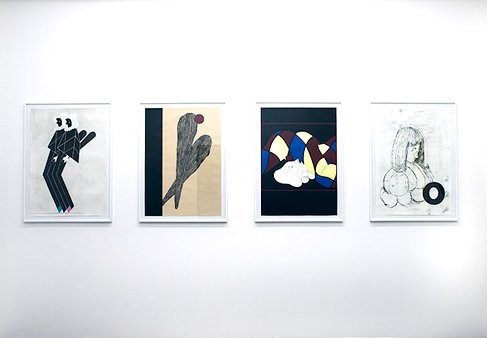 A partial account of elements and experiences related to a time travel as a symbolic narrative:
A shapely painting by Frank Stella hanging in the Museum Ludwig in Cologne, leading to a small team of harlequins brandishing blood thirsty, shit seeking, nodulous clubs. As a dirty club is a dildo floating in space, desire is the default setting of the one with unknown needs.
A series of independent Italian literary fanzines published between 1963 and 1979. One of them, originally named GEIGER, is renamed DIRTY CLUBS. This is done so that the front cover of issue N.1 can function as a time-space portal, through which the harlequins will travel back to 1972.
These colourfully dressed figures are in fact scrotal sacks, a visualization of bolus, accumulated anguish, tension and distress, the by products of prolonged surviving and insufficient living.
Protruding, drooping forms, saggy yet firm, sublimate in the creation of festive lanterns, a suffocating, incongruous, wordless, Bulbous Marauder. Floating in space is a blacked out, featured effigy in skirt and bonnet. Grinning perpetually, in an unknown cry for help, is a testimony to the very thing that constitutes a defence against itself.
Thinking of the scrotal sack as an emblem of matriarchal suffocation. This occurred during an episode of “tea bagging” that took place on my face. I noticed that the human scrotal sack, when looked in close up, appears in a criss-cross, diamond like pattern that, when hit by light, creates a chromatic effect not dissimilar from the one of a harlequin costume. The bulbousness of the sack is the shapeliness of the matriarchal being, scrotal sack-like, “Virgin of Villendorf”-like.
www.galeriebuchholz.de