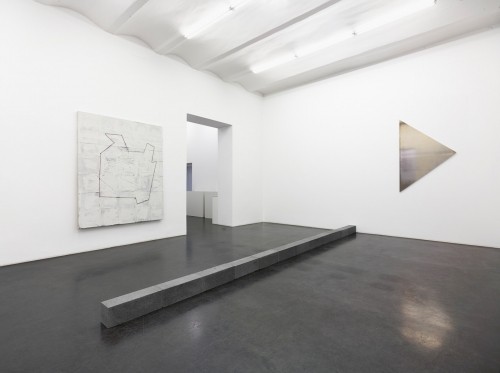 In lieu of her first solo exhibition with Galerie Buchholz, Liz Deschenes has initiated two exhibitions for the two Cologne gallery spaces and to present her work within two different constellations of artists. At Neven-DuMont-Straße, the exhibition "Ma-re Mount" brings together new photograms by Deschenes alongside works by Carl Andre, Richard Prince and R.H. Quaytmen, all made or selected especially for this show. The point of departure for this group exhibition is the history of the American towns of Quincy and Braintree, in the region of Merrymount, Massachusetts, from which each participating artist comes. This exhibition idea was prompted in conversation with the artist R.H. Quaytman and the theoretician Ed Halter (also a Quincy native), who contributes a new text to the exhibition.

In the gallery space at Elisenstraße, Liz Deschenes and Florian Pumhösl present a juxtaposition of their work. The first joint exhibition of these two artists was curated by Matthew S. Witkovsky at the Art Institute of Chicago in 2012, and that initial pairing here gets an update and a new configuration through this show.
The five new works by Florian Pumhösl are studies showing configurations of grids and circles, deriving from figurative depictions on Byzantine coins on which one can read a slow dissolution of the depicted portrait, bust or figure. This dissolution results in a kind of draw or tie between sign, ornament, and figuration leading towards complete imperceptibility.

The shapes of Liz Deschenes’ new photograms for both exhibitions arrive from diagrams on visual perception from exhibition design to stereographic viewing. One reoccurring reference also in her newest work is the modernist artist and designer Herbert Bayer.

Americans like to trace their origins to the founding of Plymouth, Massachusetts, in 1620, but not long after, a smaller colony existed briefly some miles north. Its leader, the freethinking Thomas Morton, dubbed it “Ma-re Mount,” though it is better known as Merrymount. As related in his memoirs, Morton sought to create a “New English Canaan” in which whites and natives might integrate and together prosper. The men of Merrymount traded freely with the local Algonquin tribes, and famously erected a Maypole--in keeping with old English customs--around which they drank, sang bawdy songs, and cavorted with Native American women. Nearby Puritan colonists, saw Morton’s revelers as dangerous heathens, and sent troops to shut Merrymount down after only five years.

This group exhibition at Galerie Buchholz gathers the work of five individuals, all of whom have biographical ties to the nearby region around the site of Merrymount. Liz Deschenes and Richard Prince were raised in Braintree, Massachusetts, the town that eventually absorbed Merrymount into its borders. R.H. Quaytman descends from the Quincy family that gave its name to the city of Quincy, which broke off from Braintree in the 19th century, taking the Merrymount neighborhood with it. Carl Andre and Ed Halter grew up in Quincy, and this would inform their careers in explicit and implicit ways. Inspired by this obscure bit of American history, “Ma-re Mount” brings together the work of these five to reimagine American history through oppositional counter-mythologies, and investigate how such visionary ideals may be expressed through formal means.
www.galeriebuchholz.de