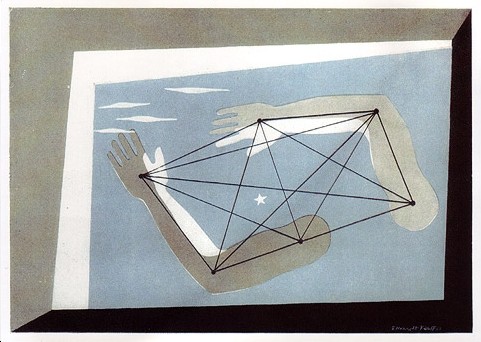 In her second solo exhibition at Galerie Daniel Buchholz entitled “Quartets”, artist Silke Otto-Knapp (*1970, lives in London) is showing a series of new paintings and drawings. While in her earlier works Silke Otto-Knapp depicted mainly exalted cityscapes as well as artificial and exotic nature, in the past few years she has concentrated almost exclusively on the theme of choreography and dance. Watercolour on canvas which still is her main medium of choice, allows the artist to let her images emerge gradually out of layer upon layer of paint that is first carefully applied and then partially washed away again. This technique creates a finely calibrated interplay of controlled composition and permitted diffusion.

In Silke Otto-Knapp’s previous depictions of figures from the field of Modern Dance and it's precursors in ballet, the stage played a necessary but merely supporting role; in her present works, however, the artist has brought the stage setting to the fore to evoke parallels with the pictorial space. This results more strongly than before in an overlapping of the imagery created by dance upon the stage with the possibilities afforded by the pictorial stage in painting. Formerly showing a preference for silver and metallic tones, colours that literally duplicate the reflectivity of the painting’s surface, Otto-Knapp has now transitioned to colour fields of midnight blue, grey and black, introducing three-dimensionality into her pictures as shadows. Points of departure for her latest works were iconic modern ballet choreographies such as “Checkmate” by Ninette de Valois, “Les Noces” and “Le Train Bleu” by Bronislava Nijinska, as well as the stage set that Francis Picabia developed for the piece “Relache”. In relation with her increased interest in the stage space as pictorial space, the artist draws here as well on the depiction of the cultivated landscape of the garden. Otto-Knapp has chosen Vita Sackville-West’s famous gardens at Sissinghurst to create a link to her earlier images.

The motif shown on the invitation is Edward McKnight Kauffer’s 1935 stage curtain design for the ballet “Checkmate” by Ninette de Valois, for which he also conceived the entire stage scenery. E. McKnight Kauffer is known, among other things, as the designer behind the famous advertisements for the London Underground. The following quote is taken from a text on Kauffer’s theatre curtain:

Kauffer's curtain for the prologue was blue/grey in colour and decorated with a giant arm and hand, suggestive of an artificial limb operated by wires and pulleys. The isolated hand was a typical quasi-Surrealist feature of Kauffer's design repertoire in the thirties. Here it is aptly used to focus on the crucial moment about to be enacted in the game of chess between Love and Death. It is a visual magnification of the moment and a dramatisation of the geometry of chess - but also perhaps implies an impersonally operating destiny. The curtain rises to reveal a giant chess board on which the dance of Love and Death is enacted. Kauffer’s block-like costumes echo the geometry of the squares: red for the forces of love, grey-blue and black for the side of Death. The dancing – Bliss said that de Valois moved the pieces like an Alekhine – takes place before Kauffer's second curtain. He chose to adapt his space-frame convention – sets of parallel lines angled to imply sharp backward recession (or abrupt forward movement). These are linked with a sequence of four large-scale triangles, which are again tilted to imply movement. The shapes shift on different visual readings and in scale, angularity and colour provide a symbolic setting for the action: heroic, restless and intense. The Black Queen first seduces then treacherously kills the red knight and finally forces the red king to submit to her will.*
www.galeriebuchholz.de