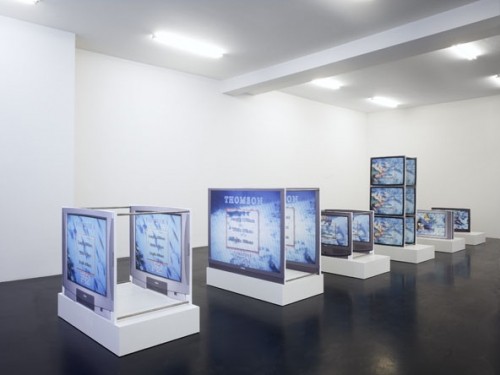 “Probably, the term television needs to be updated into the material culture of electricity
and glass”**

“Since everything that happens on the television screen is two-dimensional, this kind of art, as well as the commentary upon it, would also have to be adapted to these two dimensions.”***

On the eve of the disappearance of the tube television from retail stores Simon Denny presents a misleadingly vivid system of multimedia works that tip their hats to the regular sensibility of sobriety. In a logically fallacious gesture, the exhibition will attempt a levelheaded analysis of the physical thinning out of the television set and link it to the depth of represented space in the presented imagery, the ubiquitous TV-store display regular of aquatic scenery. By misusing this underwater imagery, the logic of the symbolic games touched on in “Aquarium Videos”, “7 Drunken Videos” and “Watching Videos Dry” are brought to a no-nonsense end point, a sober small-screen comedy. Denny constructs a four dimensional Tetrad diagram of the outmoded hardware of the domestic lounge room’s 4th wall, making confusing switches between author and media leading to a final display which is as thin as the argument it propounds.

An unnecessary opposite to Gerry Schum’s production and transmission landmark “Land art” fifty years ago, Denny’s sea art presents a series of paintings from Auckland based painter Nick Austin, and an amateur advertisement filmed with local television actor Theresa Underberg within the show, linking artist to broadcast culture in a dry glance backward.

The dematerialisation of the video screen form the cathode ray tube to the LED monitor is so noted in a cumbersome bow to the passing of a style of video art presentation now being outmoded by the computer screen and the ephemeral hardware and distribution systems that enable the accelerated flow of information through the shallows of the internet.

“Television space is a fishbowl space (...) The sculptor, then, who tries to thicken this plot, the sculptor who imports video into his/her object installation, might be a person who’s afraid of being outdated, a person embarrassed about clinging so hard to the past (...) What was analogous to sculpture is now, at first glance, more analogous to painting (though soon-to be-possible, probably, and maybe already existent in priviledged cases, is the dream of the paper-thin TV). At the moment, anyway, the conventional TV set is neither painting nor sculpture: television is too much science to be art (...) We know that the screen is only the facade of the box; even now that the screen can be drastically reduced in size – as in the two-inch 'watchman' – there still has to be room for the TV tube. The TV box still has to have depth, which remains the largest dimension of the box.”****

In addition to the exhibition a program of videos by video artist Michael Smith will be presented in the gallery on Saturday, September 5, 4 pm.

Simon Denny (b. 1982, Auckland, New Zealand) produces sculptural installations that follow the way one experiences objects and images. Combining selected subjects with conventional exhibition styles, Denny works through different layers of authorship and forms of structural logic with an attention to the most common formats of visual experience.

*Vaudeo is an early form of comedy-variety television show and a precursor to the sitcom that married the old vaudeville format and new video requirements. Dominant on networks in the United States in the 1940's and 50's, Vaudeo resurrected the essentials of stage variety entertainment including dancing, popular songs, animal acts, circus-style stunts, and big-name guest stars and/or series regulars and sandwiched them between funny skits and monologues filled with puns, topical references, and farcical jokes; plus pratfalls, pies in the face, and spirited interchanges between comedians and studio audiences.

adapted from: J. Fred MacDonald "One Nation Under Television: the rise and decline of Network TV", 1990

*** Ursula Wevers,“The television gallery idea and how it failed”, 1979