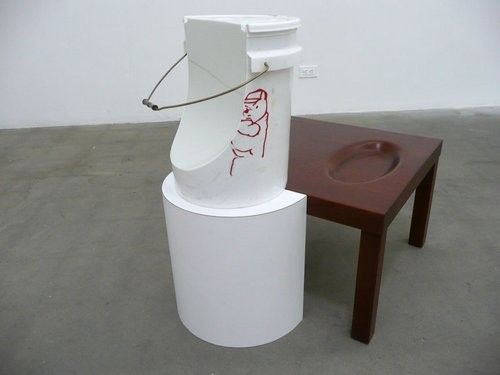 (ara)
The impossibility of sculpture:
In league with any variety, or brotherhood, of phantoms resides the putative-ostensible artwork. Ma(r)king majesty (as) its very own, even in laughter (the majesty of laughter). In presence majestic things reside. And so resides the language-gift of sculpture. But what if it all went away, and suddenly this thing appeared not in majesty, but in candor, in bald candor. (Like that nightmarish Lacanian Real sans nightmare?) What does bald candor even look like? It’s called sculpture. Sculpture is bald candor. So defines the definition of how Ara Dymond uses his mouth: as sculpture. And sculpture as a mouth; a mouth not as vessel of voice but as a mouth. What happens when materials are true?
Therein lies the secret. What is the echo, and can it do as it can say?

(uri)
The undefined gene:
In search of the miraculous we knock into barnacles as we slip on the jetty out to the sea. But as we see that pain yields blood, we look away so as to bear the biology that owns us. We look away and see the ashen panoply of barnacles. Oh, those barnacles can become part of a social network, yes! We go home and wash our gashed leg with gross-ass iodine, and then we set off to anthropomorphize the barnacles. Hmmm, a palette will be necessary, as will a thorough map of human hair; dermatological auras will regress to the seas, maybe, but maybe not. All phenomena are false cosmology: ok. So we have to massage our laughter without wounding it, right. Coddle the laughter with the manual soothing of a mind interested in minding. All the cares in the world can still be cared for as long as we are taught our private parts*. Prevent in order to perceive and then perceive in full perhaps? In full, be everywhere. And the geneticist approaches in camera, in clothes, in total. In total, or in full? How can we bear this measurement?
Oh, that’s easy: review!
*yeah, those too, but not only those.