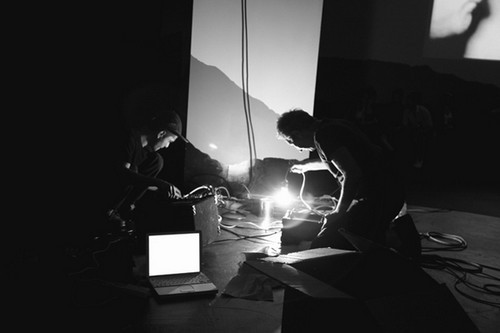 “Soon, something will happen, certain things will merge, certain appearances will coalesce with figures, and music will be made, compositions denied, abstractions pursued as poetry. Dialogues pursued as the overtone of an anonymous woman.

Pursued as the artwork of a weary language.

As the stab through a leather belt, and its impossible scream. As the artwork of fragility. The fragility of nature. A motorcycle. The incapacity of reason. The forceful attempt to say what you are saying.

Here, under broken glass, and formal elements of otherwise improvised geometries, some forever, not for better, we will bear the strength of a necessary ambiguity in art. A necessary ash upon our reasons.”

Friends and timeless collaborators Amir Mogharabi (b. 1982) and Jeffrey Perkins (b. 1945) bring spontaneity, and a coincidental eye for movement and form, together to exhibit works that retrace, reflect, embrace, and neglect their own history; neglect their relationship to ‘the ethereality of an otherwise performative, and impossible to represent,’ practice.

Amir Mogharabi is an independent artist and philosopher recognized for an ability to transform the ineffability of particular ideas, generally premised on contradictions, into experiences. With visual (however unintentional) references to abstract expressionism, and a simultaneous departure from the tenants of conceptual art, Mogharabi’s work derisively avoids choreographing the shift from philosophy to form.

Instead, whether by installation or performance, Mogharabi corrupts premeditated acts of production, with spontaneity, noise, poetry and an ambiguity “necessary for finally feeling what philosophy never allowed us to hear.”

His most recent performance ‘STONE,’ hosted during the second phase of X-Initiative, brought philosophers Jacques Ranciere and Michael Hardt together as the foundation for an ongoing project that will culminate with his premier solo exhibition in Rome on January 11th.

Allowing himself to retroactively consider how elements of ‘acts’ in his ongoing practice relate to one another, his sparse contributions to Entendement reflect the development of an overarching personal history. And, inspired by the practice of artists like Adrian Piper, the lineage of this history “has to come from a deeper place than just the intellect.” (2001)

Jeffrey Perkins is a pivotal figure in pioneering the Fluxus movement, and dedicates his current practice to prolonging the tradition. Perkins is responsible for illuminating shows by the Velvet Underground with his rotary light apparatus, and participating in a multitude of other projects between Yoko Ono, George Maciunas, and Alison Knowles, and continues to be an active part of the performance world. He also exhibits films with Anthology Film Archive, including his notorious Movies for the Blind, which abstract from his light practice, by leaving the audience in utter darkness with the sounds of a 21 year long project recording conversations held with strangers during a hermetic period as a taxi driver.

Perkins is also the contemporary and collaborator of the philosopher-artist Henry Flynt, a reference to whom will exist in Entendement. Aside from the complementary quality of spontaneity in the performances of both Mogharabi and Perkins, Jeffrey’s contributions exhibit a visual affinity to the artists’ cross-generational practice, and optimistically signal that something new is happening.
www.danielreichgallery.com