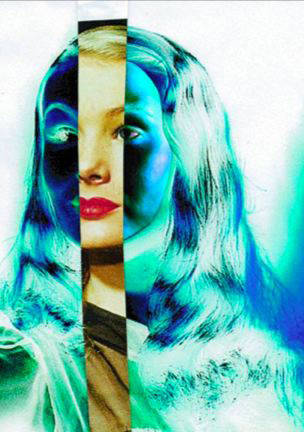 Kielar’s investigation of the representation of women in the late nineteenth century and the twentieth century utilizes her own image and parallels a synthesis of culturally loaded avant-garde styles: constructivism, primitivism and surrealism, bringing forth something pop and new somewhere between Louise Nevelson, Venus in Furs and the Clockwork Orange furniture of Allen Jones.

In relation to culture, Kielar’s title Lady has various connotations meaning the counter part of a gentlemen or an ephemeral muse, but the phrase has been a point of feminist contention. While constructivist elements provide a sense of bodily systems in Kielar’s work, primitivism and surrealism equate the woman with the other and utilize her body as a surface on which to write manifestoes. Kielar is most interested in diffusing approaches suggesting that the self is not a whole but a composite of the objects we surround ourselves with. In terms of subverting avant-garde representations, Arcimboldo is a vehicle because he depicts individual subjects made out of objects implying that individual’s soul is comprised of their surroundings.

Most importantly for Kielar, Lady is a woman that consciously forms herself to reflect the society around her and in doing so partakes in the development of culture. In this regard, one might reference Baroness Else von Freytag-Loringhoven who in her costumes and escapades performed Dada. Contemporaneously, Kielar’s use of the automaton suggests the role of machine age mass production in the formation of the self. In quoting avant-garde methodology, Kielar can inhabit the body of avant-garde women and alter it. Kielar’s sculptures represent aspects of her own image altering self perception and constructing variable identities. While modeled on Kielar’s own body, each work in the show is a different character which maintains the uncanny aspect of a doppelganger. Throughout the show there is a construction, mockery, embellishment, fracturing, copying, beautifying of the female form. The result is a group of ladies grappling with their psychological sate as it is exposed through their exterior image.

The Empress, a large stacked figure made out of wicker vessels resembles totems and wicker men. She has a stolid dislocated presence powerful or intimidating due to her scale or awkward in her precarious assemblage. Her grandeur is debased by the construction of her body from of common imported wicker baskets found in stores like Pier 1, Crate and Barrel mummified in rope. In that way the familiar function of the vessels puts her as much in a domestic realm as in a spiritual one.

Martha is a Martha Washington sewing box animated with the addition of arms, legs, and a head. The sewing box, charged with the history of women labor: repression, craft, and monotony has been transformed into a wild-eyed figure covered in leather and crawling on the floor. Martha is jolted with sexuality, and the sculpture is intended as a scary provocative melding.

Kielar’s collage series equates photographic representation with masks -- taking photos of women from the past, now deceased leaving only their photographic image reflected in a negative mirror perhaps making a little rectangle for the possibility of a “real” human Veronica Lake beyond the image. The multiplication of the image of a female icon in grids of four results for the artist in a cancellation and a return to her referencing of self.

Lady is surprising: feminist, fresh and full of potent ideas as to the identity of the artist and the subversion pulling apart and rendering of art historical precedent with sensitivity. So that in the same way the surrealist pulled the woman apart, Kielar pulls the surrealists apart making something like nothing else: complex and open to interpretation.