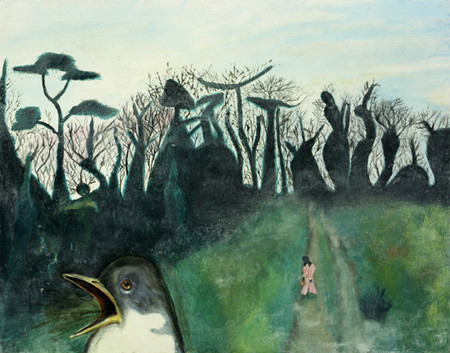 Daniel Reich Gallery is very pleased to present the first New York solo exhibition of London artist, David Harrison entitled “Green and Pleasant Land.” A graduate of St. Martin’s College, Harrison’s dream-like renderings of what seem to be distinctly English scenes are marked by a wealth of vegetation, flowers and active skies filled with stars, suns and birds. The distinct quality of his style and subject matter is indicative of what he terms “the disappearing world,” a local folk world impinged upon by global uniformity. Wild creatures populate Harrison’s scenes whether they are juvenile delinquent “hoodies” named for their hooded sweatshirts, restless wildlife or totemic forests. Of special importance is the “hare,” an oddball creature whose unpredictable habits make its behavior difficult for scientists to predict and one of whom (according to legend) fell off Noah’s ark, so that for procreation the untamed animal doubled itself.
The creatures of England’s folk traditions and the natural life of the heath perform a restorative function in Harrison’s work. “Green and Pleasant Land,” adopted from a poem by William Blake, is partly sarcastic denoting the infringement of twenty first century development upon the English landscape. While Blake’s phrase “Green and Pleasant Land” captured the imaginative fertility of his landscape, contemporary England is no longer green and pleasant in Harrison’s estimation. Among other artifacts, old-fashioned caravans (English vacation homes) populate Harrison’s disappearing world, becoming gentle hexagonal shapes in quiet green pastures. An iconic English image such as a man in a red telephone booth with an umbrella appears skeletal as he is overtaken by crows (messengers of death in English folklore). Harrison vividly captures the persistence of natural systems under duress. For instance, birds and insects are plentiful in Harrison’s paintings and human aspects of animal expression are emphasized as in “Chance Meeting,” where a coy and maidenly poodle in a gingham country dress shies away from the rude advances of a scarecrow. In other works, contemporary life transpires within the realm of the natural and the eccentric. For instance, in a lonely scene, a woman with a beehive hairdo occupies a couch amidst laundry, an oval portrait and a bottle of wine, watching TV in the dark. While of the present, she is as aloof and as oddball as the hare. Among the newspapers crumpled beneath her coffee table, one can imagine the fecund ecosystems of flies and rodents fostered by human clutter. As a rich painting, “Timeless City” seems without a historical period depicting a statue reaching in aspiration against an overwhelming sky. Perhaps the buildings have stood for eons, but the sky dominates and it seems that once the absurdity of present human traverse back and forth across oceans has passed, the sky and a new form of local nature will, in some interpolation, persist.
The scene Harrison encountered in England during the seventies and throughout the eighties greatly shaped his work and person. In many years of painting, the auditory world has lent dimension to his rich environmental imaginings. An early memory is the discomfort of early school tempered by the primal almost Tin Pan Alley sound of Prokofiev’s “Peter and the Wolf” narrated by Peter Ustinov. As a young man, while nicking a handful of blue beat ska albums, Harrison accidentally grabbed an album by the band “Gong.” Strange synthesizers, jazzy saxophone and psychedelic sounds with a thumping base line evoked anarchic pagan influence recorded during set phases of the moon. A bit later in 1972, Harrison nicked an album entitled “Roxy Music” which changed his life with its elfin Brian Eno creations mixing English fantasy and Weimar gloom. In terms of contemporary art, Harrison’s paintings reflect dialogue with classmate Peter Doig, while looking forward to present varieties of German expressionism. In terms of the nineteen-seventies, his fanciful interstellar utopian ideal parallels the interests of many populist American artists who utilized the metaphorical lens of the “Wizard of Oz,” while Harrison looks to the English “Alice in Wonderland.”
Harrison has previously exhibited at Victoria Miro Gallery in London and in “East End Academy” at Whitechapel Art Gallery. For additional information please contact Daniel Reich Gallery at 212 924 4949 or at daniel@danielreichgallery. Daniel Reich Gallery is open Tuesday through Saturday from 11 - 6 p.m.
www.danielreichgallery.com