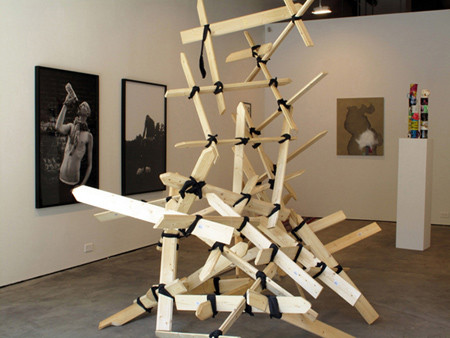 A starkly aesthetic brew of associative symbolism, material and gesture, Aalrust images and titles are boldly provocative as in a homoerotic painting of combat boots and underwear titled Ich kann beim besten Willen kein Hakenkreuz entdecken (With the Best Will in the World, I Cannot See a Swastika. 1984) after Martin Kippenberger’s painting. Aalrust’s Helter Skelter use of material, subcultural imagery and open range meditation seems a response to the docile tractable quality of everyday life as in a brightly colored precariously tall stack of repaired coffee mugs, which in spite of their transient second hand history retain a domesticated sunny low-brow feel. As suggested by his adaptation of Kippenberger’s title, Aalrust examines the rightist homosexual and society’s masochistic romance with repression, enacted in private relationships and public political movements. Aalrust’s work incorporates an iconography of power akin to representations of Louis XIV where countercultural fetish mirrors and replaces establishment fetish.

As though putting Wolfgang Tillmans in reverse, this exhibition features photographs of alienated bohemians highlighting the detail of fashion and gesture. A skinhead against a wall of graffiti chugalugs a Coke light. In skinhead culture signs carry weight, and light in contrast to heavy is paradoxical to the violent political mythology of the skinhead. His avoidant pose recalls advertisements while the boots and underwear painting is aesthetically misplaced. Its painterly strokes strangely make Van Gogh’s shoes seem punk and its hardcore queerness is anachronistic to present day gay activism in which the most prominent issue is marriage. Aalrust’s images have bold historical association. As the commoditized paraphernalia of the punk allows disenchanted Northern European youths a vocabulary for dissatisfaction with social norms, Aalrust’s skinheads and punks retain a Rimbaud inspired sexual ambiguity and despite of and consequential to their homoeroticism, Aalrust’s imagery points to the rise of white supremacist movements in Northern Europe in the wake of the fall of the iron curtain and rising immigration.


In this context, the title of Aalrust’s 2008 Bergen Kunsthall group show warns, “...if you destroy the image, you destroy the thing itself,” an idea which brings us back to Ich kann beim besten Willen kein Hakenkreuz entdecken, in which a riot of swastika like forms comprise a formal abstraction. Kippenberger’s painting begs the question as to how the hiding of a thing (the Swastika is banned in Germany) emphasizes its presence. Bringing us back to Aalrust’s work, it is worth noting that German Neo-Nazi movements signify the Swastika in negative with a circle of four black hyphens. How does the posturing of Aalrust’s leftist punk and skinhead youths represent a rebellion against the vulgar impulsion towards normalcy that contributed to the rise of fascism?


In a work called “Stockholm Syndrome,” Aalrust adapts an iconic photograph of the famous 1973 Norrmalmstorg robbery in which women hostages were thought to sympathize with their captor. In this exhibition captivity is a touchstone for cultural capital and the inherent desperate passive aggressive rebellious gestures made within its cage. A father is seen on video acting out Charcot-like spasms as he sits in a big chair behind an orderly desk complete with a green ink blotter while long boots bearing rightist white laces are licked in another photograph. The paradoxical overlay of the father’s mythical world with masochistic bootlicking brings to mind the Sylvia Plath poem Daddy in which father is most quintessentially described as the interior of a big black boot. Hence the antiestablishment impulse has currency. For instance, in ornamental/oriental we have a specimen, a slice of oriental carpet recalling the orientalist otherness of the Bohemian deployed for use in middle class living rooms, here encaged in an IKEA frame, evidence of a still imperial Europe cheaply manufactured in eastern Estonia and so on.

Aalrust studied at the Academy of Fine Arts in Bergen, Norway where did an exchange at St Martins College in London. His 2009 show at Galerie Sandy Brown in Berlin examined the imagery of the Cosby Show in relation to the ideal family. That year he also exhibited work at Silberkuppe in Berlin. In 2008 he contributed to a group show a James Fuentes LLC and participated in A Member of the Wedding curated by Susanne M. Winterling at Daniel Reich Gallery in New York. In 2007, his work was included in Secret Flicks at Galerie Neue Alte Bruke in Frankfurt. Aditionally, he presented a solo exhibition: As if There’s Always Free Cheese in the Mousetrap at After the Butcher.
www.danielreichgallery.com