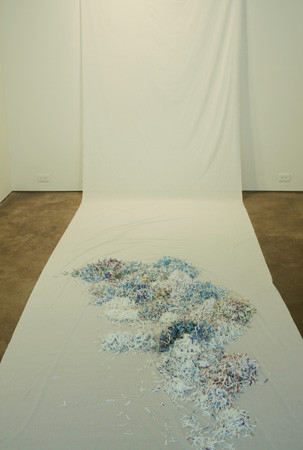 After his breakthrough solo debut exhibition Strangers at Daniel Reich Gallery in September, Futoshi Miyagi’s sequel exhibition is titled Island of Shattered Glass sampled from the Robert Smithson title Hypothetical Continent -- Map of Broken Glass -- Atlantis. For this exhibition, Miyagi takes as his point of departure Okinaiwa1s myth of “Nirai Kanai,” a fertile unknown island across the ocean where everything originates and returns, the good the bad, the gods and the dead.

While Miyagi’s Strangers series photographically concocted a fantasy of gay domestic life in New York, Futoshi’s Island of Shattered Glass parallels the legend of “Nirai Kanai” through imagery resulting from an imagined, accidental trans-Pacific return to Okinawa. As is evident from the themes developed in Miyagi’s Strangers series, this voyage opens up broader questions. Miyagi’s work ponders the fleeting nature of memory itself -- both personal and cultural -- attempting to regain memories before they are forgotten through their resurrection as art objects: a practice which can also be seen as a form of reconciliation and alteration. The representation of memory yields an imaginary fictional past much like the metaphor of “Nirai Kanai.” While Robert Smithson used broken glass for Atlantis, Miyagi’s Atlantis consists of thin strips of shredded “chigiries” portraying moments in the artist’s childhood diffused by layers of memory and fantasy. Miyagi violently shreds his “chigiries” after completion, so that the island of “Nirai Kanai” takes shape on the gallery’s floor from shredded memories. However, the original “chigiries” are preserved albeit distanced by their photographic documentation and abstraction in faded black and white prints, which hover around Miyagi’s island. In this way, Miyagi’s work also addresses inaccessibility in regards to geographic distance and time privileging what is vaguely forgotten over what is clearly remembered and the cultural implications of forgetting. For instance, these ideas are also relayed in a separate project shown here where Miyagi looked at 1960s elusive muse-format love songs such as Walk Away Renee sung by artists of variable sexualities and noted the absence of male lovers. To rectify this omission, Miyagi wrote pop songs about men: “but I miss you, in a way that people carry lovers pictures, in their wallets warm in their hip pockets, faces, places, voices, memories.” Indeed, this is an instance of the popular romanticism deployed in Futoshi’s work recalling the examined social structure as in Strangers.

Influenced by artists like Felix Gonzales-Torres, Miyagi seeks to unite conceptual pursuits with a suggestive opulent simplicity and sensitivity. Even if Miyagi’s artworks are simply words, they include rich linguistic interpolations. Miyagi’s work also has a poetic character in which an anecdote can be extrapolated from a sense memory. For instance, a fallen puzzle in this show is a notation for an illness suffered by the artist’s mother. As such, Miyagi is a paradoxical romantic/anti-romantic: an art practitioner whose work arises from forgetting and destroying his vision in a series of dreams.
www.danielreichgallery.com