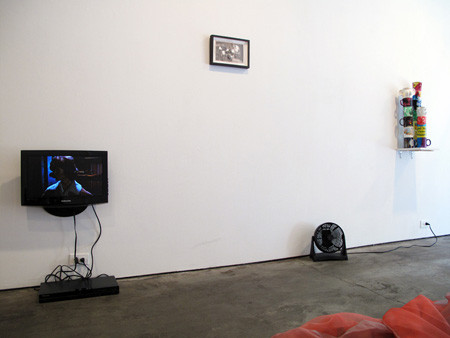 Daniel Reich Gallery is pleased to present a group show entitled “Holes.” In the mid nineties, summer shows were displays of works from the gallery inventory. The preparation involved the unwrapping of a curious package in the racks, which would by chance be awarded a prime spot on the wall.

While sorting through my racks, it was easy to hit upon the idea of holes because so much artwork is dependent upon the simple mark of the circle and smudge. Oriented around the varying uses of this formal mark, the simple intent of this show came to be to highlight some interesting work that had been done in the past few years, but that I felt that perhaps not everyone had seen. Additionally it seems a time of holes: of holes in the pocket and holes in the heart. However there is also Alice in Wonderland’s Rabbit Hole through which is not merely escapist surreal, but a satirical and astute notation of the absurdity of society.

Apropos of the nineties, this exhibition features a work by Jack Early, a chronicle of the history of Pruitt/Early beginning in 1993. It is in many ways a Barry Lyndon story as well as a classic art world document in its description of the early glamour of the studio where the likes of Richard Prince and Damien Hirst came to purchase works. “Everybody had a piece of Pruitt/Early...” writes Early. Early’s parents learned about his homosexuality in Vogue. The narrative climaxes in 1994 with the ill-fated Leo Castelli show and its aftermath. “We went from signing autographs to having people cross the street when they saw us coming...” He concludes: “It’s funny, when something dies, if you are lucky, something else might come along... I started writing these songs in my head songs with melodies and everything... I had never been happier in my life.” As an adjunct to this close, Early includes a stack of white records filled with songs that he has written and sung inviting the viewer to simply take one.

Very importantly, this exhibition also includes a section of Susanne M. Winterling’s GAK Bremen exhibition Dreaming is Nursed in Darkness. GAK Bremen makes its home in a converted tar factory, the Teerhof. The slippage from tar to the idea of being tarred and feathered allows Winterling to integrate societies 20th century fugitives: Jean Genet, Eve Kosovky Sedgwick and Angela Davis. Including a wall painting, the photo suite installed here features circular objects recalling porthole. In a film, water drips into a dark pool subsuming the viewer. Perhaps we drown in Winterling’s pool. Yet the sensory perception of human skin makes being in water, the consistency of which corresponds to blood, liberating equilibrium in oblivion. In an ocean or a river, worldly concerns always become minute against the sublime largeness of nature making water one of my favorite things.

Additionally Susanne M. Winterling’s Isadora’s Shawl, remembers Isadora Duncan, a woman who was a spiritualist, an advocate of free love and revolutionary dancer on her own terms. Represented here is Duncan’s decapitation in a series of circles and in the debris of the signature scarf around her neck.

Also included in this exhibition and with a formal relation to Pruitt/Early are stacks of marvelous shattered cups by Endre Aalrust, which are lowbrow in disposition but serve as markers of home. If one has a mug, even if it is kept in an automobile, one has something homelike and the circular nature of the opening at top is of interest.

Futoshi Miyagi’s Hope We’ll See Each Other Soon is a red yarn barbed-wire fence with an escape hole. This work is an imaginative interpretation of the wire that surrounded American military bases in Okinawa, and its display at the gallery is a reminder of segregation and of fences, that in marking territory, tend to characterize the people outside of them. There is an element of a Kusama painting to the blood red fence as one perceives it straight on like a painting and the work obscures the exhibition behind it making for a bit of a dizzy experience when it is contemplated.

Given the positive reception to Amy Gartrell’s recent ceramic and painting show, I thought it would be interesting to show the evolution of her new formalism. Her art-nouveau Tiffany glass gargoyle like production which I showed a few years ago seemed to me like works that my old boss while going through the racks, would have remarked “these will look great in a year...” and so they do!

Also included in the show are works by the gallery’s painters Birgit Megerle, Tyson Reeder, Scott Reeder and Paul P. whose paint work can be serious in its disposition - still using mark making and washes that in the past year have seemed more and more pre-1980.

I am also screening Michael Powell’s 1959 film Peeping Tom because it involves the proverbial hole of the camera but is an early exploration of the subject. Additionally, it includes a record of perversity recorded by the protagonist on film. It is also the hole of memory structured around fear, which in uncertain times seemed to fit this endeavor. Like Early, the hostile critical reaction to Powell’s sexually sordid film caused the collapse of his career.

While this show features many artists affiliated with the gallery, viewers can also think of all the holes, spots and drip marks that populate art production and careers. For instance, Lee Bontecou, Lucio Fontana and Adolf Gottlieb going in and out of fashion.

Anyway, hopefully the show is of interest and I encourage people to come and see it. I am hoping to build from this experiment in the coming fall and spring season.
www.danielreichgallery.com