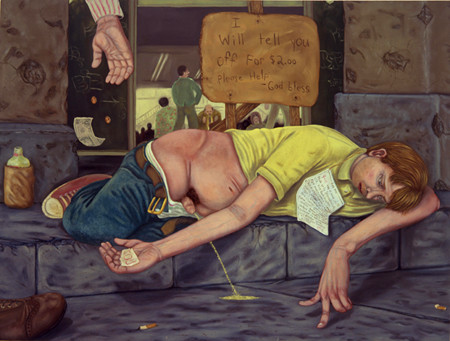 Reminiscent of the social critique of George Grosz and Pierre Klossowski, Michael Cline’s magical, luminous color and imagery lend his canvases a fable-like quality that recalls a hobo-America witnessed through slightly ajar doors, revealing a fantastic, tawdry, and concealed world transpiring in dream-like silence. Given the clay-like plasticity of Cline’s figures, it is hard to imagine the sound of their voices, especially since they often simply hold written placards filled with political absurdities so that they do not have to repeat themselves. The pristine, pictorial, even nostalgic quality of Cline’s canvases contrasts with the bedlam of their violent, sexually heated content. Cline’s characters and environments teeter between an archaic social realism or Ashcan school populism and the archetypal or allegorical. Cline’s paintings possess a madcap humor about them. For instance, the odd cartoon physiognomy with which certain figures are rendered seems itself a comic predicament, while the askew medieval anatomy of others furthers a sense of maudlin atonement inherent in Cline’s representation, wherein an entire story transpires in the illusory, composite space of a doorway.

Cline’s down and out environments, populated by hard luck figures and richly hued color, are at odds with the image of a new sleek and sanitized, socially-facile city. Cline finds a wealth of detail with which to indicate his world: 40s gangster’s moll hairstyles, bare Guston-like light bulbs, skateboards, dime stores, McDonald’s soda cups with straws, tin cans, the voyeur’s mystery of panties and a bra displayed on a tenement cloths line, stoops, round-toed shoes and a plethora of objects vaguely reminiscent of the depression era or the recession of the seventies. This seamless collage of elements invariably situates the viewer in the frustrating predicament of trying to construct something coherent from awfully familiar fragments like the protagonist of a noir film trying to remember the scene of a crime. Furthermore, the abundance of detail heightens the restless topsy-turvy climate in which Cline’s characters exist on the verge of disaster or salvation. Often it seems the subject at hand is one of great consideration and each carefully rendered element in the composition is recognizable and evocative, (for instance a pocket comb), yet vaguely out of time. In nearly every canvas another space is implied, whether through the mouth of a storm drain or the observation window of a jail cell through which a face peers, enhancing the impression of social invisibility while simultaneously suggesting a world without privacy. Even the foundation of the buildings are pockmarked with holes revealing the brick structures beneath them, while over a wall in front of which a police arrest takes place stands a luminous, surreal, oddly beautiful city street, shaded by green leaves strikingly familiar from memory and hyper real in its illuminated quality.

Cline juxtaposes these references to Americana and the prudish culture of the 50s (through fashion and context clues) with provocative blurbs, scenes and political catch phrases. It is a narrative he allows the viewer to write as he supplies the set up through the dire social and economic circumstances of his subjects, creating something altogether familiar, singular and strange.

Michael Cline was born in Cape Canaveral, Florida. He lives and works in New York City. Cline received an MFA from the Art Institute of Chicago in 2003. He has recently shown his work at Galeria Marta Cervera in Madrid. Cline’s work has been included in Happy Days Are Here Again at David Zwirner Gallery; his work was subject of a solo show at David Kordansky Gallery, Los Angeles in 2005 Upcoming exhibitions include a solo show with Galleria Il Capricono in Venice and a group exhibition at Blondeau Fine Art Services in Geneva curated by Marc Jancou in spring, 2008.
www.danielreichgallery.com