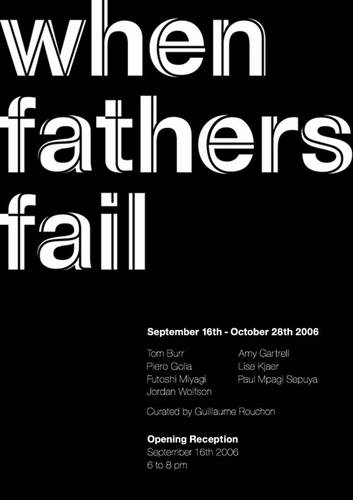 Daniel Reich Gallery is pleased to present “When Fathers Fail”, a selection of works tied together by the fundamental premise of the artist’s will to create democratic artwork in an attempt to weave new modes of connections between people. The works on view have in common an intriguing and thought-provoking lack of self-sufficiency. As such, they are not to be apprehended as bold and imposed statements from their author but rather as original elements that viewers are invited to combine and configure into original cognitive patterns based on their own historical background. Using the artwork as building block for a new language, the audience is given the opportunity to freely consider the pieces as evocative signs, rather than as self-referential and complete entities. Enticing the viewer into a mental exercise based on trust and intimacy, these artists propose a base for organic and immediate bridges of communication between their personal set of ideas, and the public.

If this type of practice necessitates a relative recession of the author’s presence as traditionally understood, it actually relies on a basic introspective reflection from the artist often reacting to parameters such as personal background, but also to global factors such as the current social and political contexts. In the light of recent - or past yet comparable - historical events and policies, these artists naturally tend to balance a general feeling of helplessness and create some of the most open-ended and democratic type of works ever produced. In responding to a widely felt sense of disempowerment and distrust towards the authorities and the media, they offer neutral grounds for reflection, analysis, and self-assertion.

By creating non-confrontational criticisms of dominant structures, they allow and trigger a redefinition of the existing systems, and ultimately contribute in reshaping the mass-proposed and promoted models of existence as social beings.

Basing his soft sculpture Put Down II on horse equipment, Tom Burr offers a deconstructed vision of the familiar material and reconfigures it into an artifact capable of evoking the sphere it pertains to, and far beyond. Through sculptural adaptations of elements belonging both to public and private spheres, Burr reveals a potential for subversive experience within the vocabulary of minimalism.

As the latest development in her practice, Amy Gartrell is presenting her personal version of the Rorschach ink drawings used in psychology and psychiatry. By applying a psychedelic palette characteristic to her work and introducing a third dimension, she brings forward a questioning of the well-known test, revealing its limits and negating its accepted universality.

Characteristically intrinsic to Piero Golia’s practice, humor certainly isn’t missing from San Fernando Galaxy. In this photograph, an aerial view of a suburban California Valley is made to look like a wondrous interstellar space. This intentional trickery accounts for Golia’s will to engage in a re-conception of the photographic medium by challenging its traditional relationship to truth and reality.

Language holds a predominant role in Lise Kjaer’s installation Untitled, Breathe. Arranging single letters into transcripts of speeches and writings by influential historical figures such as Mother Teresa, Lao-Tse and Thich Naht Hahn, she purposefully allows random letters to fall erratically to the ground. In ding so, Kjaer invites the viewer to complete the original message visually and mentally, based on subjective interpretation and guessing. The intertwining of texts originally belonging to different eras also accounts for Kjaer’s conception of historical events confined into a repetitive cycle.

In calling the two pieces presented “objects”, Futoshi Miyagi sets ground for a very humble apprehension of his work. If both pieces openly criticize the legitimacy of photography as a documenting and objective medium, they also carry a deep emotional dimension when considering that the deleted images - existent as in Untitled (An Old Album and Ashes of its Contents or latent as in Untitled (Self-Portrait, Twelve Rolls of Exposed Film - relate to his private sphere. In literally annihilating documents pertaining to his own history, Miyagi sparks a bond of trust with the viewer, and triggers by analogy a reflection on the role of conviction and other subjective factors when looking at images believed to be factual.

Paul Mpagi Sepuya’s “The Difference between a Memory, a Portrait, a Resolution” emphasizes the importance of subjectivity as a parameter for assessing photography, and more specifically the genre of portraiture. In doing so, Sepuya challenges the photographic medium as it is traditionally considered and reveals the inevitable personal projection involved in looking at a portrait. Using his subject matter of choice, the male nude, the artist evolves into a re-conception of his own practice.

With Dreaming of the Dream of the Dream, Jordan Wolfson creates a perishable work: one that may destruct itself before the closing of the exhibition. Due to the short length of the film loop and the very characteristics of its base medium (16 mm stock), this design is bound to happen at an undetermined time, possibly as it is being shown. By initially compiling water footage extracted from selected animated movies and arranging them in a morning to night cycle, Wolfson highlights the passing of time and points out the ephemeral quality of any artifact. This translates into the very medium of the piece, as the artist edited the movie digitally before transferring it onto the historical medium that is 16 mm film.