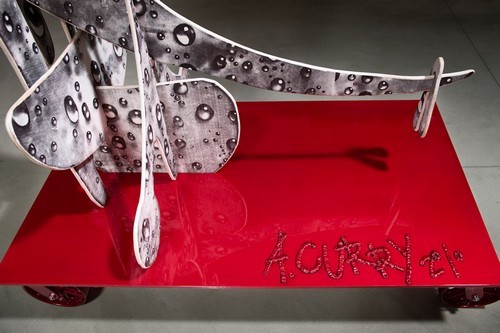 David Kordansky Gallery is pleased to announce Two Sheets Thick, an exhibition of new work by Aaron Curry, on view from June 5 through August 7, 2010. An opening reception will be held on Saturday, June 5, from 6:00 to 8:00pm.

Aaron Curry's sculptures, paintings, and collages represent a radically revisionist take on the Western artistic tradition. Seemingly the product of an aggressively historicizing id, Curry's work replaces the idea of a visual language with that of a constantly shifting context––a formal universe whose boundaries collapse and expand at will with pornographic vigor. In Two Sheets Thick, the establishment of such a conceptual/formal environment is taken to a new, completely immersive level.

Curry has covered the entire gallery space with images of beaded liquid hand-silkscreened on cardboard. These images have been composed on the computer using a drawing tablet, so that what begins as a mark drawn in digital space is given new life in the physical world. Sculptures, paintings, and collages are surrounded, camouflaged and disrupted by this simultaneously violent and deadpan backdrop. In fact, it is possible to see some of these discrete works as having escaped the two-dimensional parameters of the backdrop, taking new form as three-dimensional objects or layered collages.

While Two Sheets Thick takes its place alongside other experiential environments (beginning perhaps with the caves at Lascaux and also inclusive of more recent examples like Kurt Schwitters' Merzbau and El Lissitzky's utopian architectural projects), Curry's approach also accounts for the perceptual vertigo that can be caused by immersion in digital environments. However, the space is not so much a commentary on the virtual as it is an explosion of the formal possibilities inherent in the transition between the virtual and the real. A guiding contemporary reference for Two Sheets Thick, for instance, might be seen in the perspective, layout, and design of video games like Doom and other first-person shooters that use flatness as a way to describe depth.

Just when it seems that a sculpture composed of slotted-together, two-dimensional forms is describing a three-dimensional volume, viewing it from another angle will reveal an irreverent celebration of flatness, a return to the giddy Cartesian geometry of the cardboard panels that line the gallery walls. This can be seen clearly in the sculptures that lean against the wall, which enter into dissonant dialogues with the paintings and collages that hang around them. Other, free-standing sculptures have been produced in ultra-refined reflective high-polish aluminum. These works further complicate the notion of formal and perceptual play, blurring the distinction between the object and the space it occupies.

Though his intellectual framework has been shaped by the matrices of industrialized production, Curry's studio is reminiscent of a one-man guild, in the sense that Duchamp worked as a one-man guild. In Curry's work, an individualist, hands-on approach to materials critiques the Romantic figure of 'maker' while retaining the sense that things can be lovingly made, whether they are objects, images, programs or virtual environments.

What distinguishes Curry's handling of the virtual is that he is never content to let it stay that way. He is as liable to paint an image of a drop as he is to screen an image of it or actually let paint drop. In this sense, the virtual maintains its link to the age-old techniques of representation that have dominated the Western pictorial tradition for centuries. What Curry achieves is perhaps best likened to advances made by the painters and draughtsmen in the 16th century, when perspective became a product of scientific as well as narrative and devotional impulses. Two Sheets Thick displays a renaissance mind at work, and a renaissance pair of hands.

In July the gallery will hold a reception to celebrate the release of a monograph on Curry's work published by Walter König, with contributions by Martin Germann, Bruce Hainley, Richard Hawkins, and Alessandro Rabottini. The reception will also commemorate a new multiple published by David Kordansky Gallery. The multiple will be presented in a hand-silkscreened box and will be limited to an edition of 100.