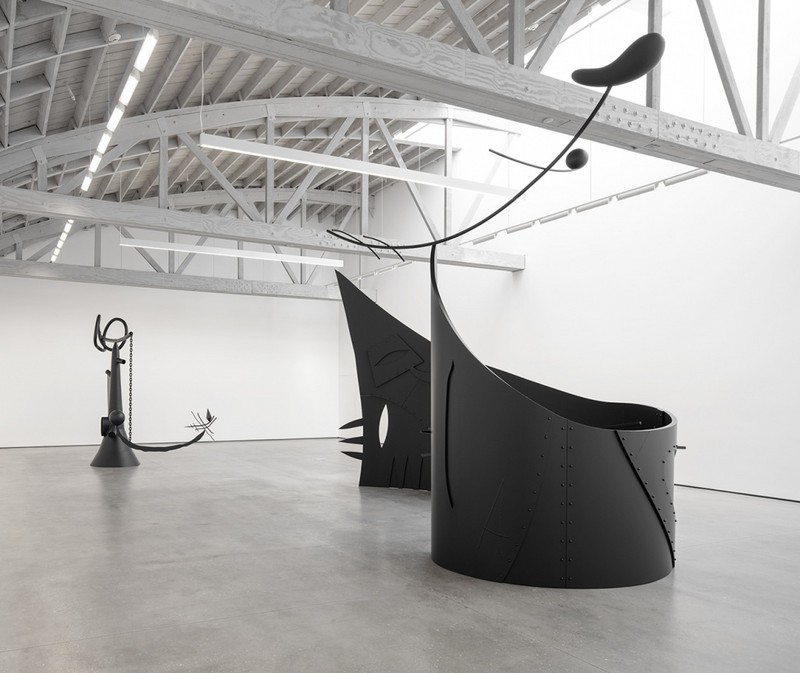 David Kordansky Gallery is pleased to announce STARFUKER, an exhibition of new work by Aaron Curry. The show will open on Saturday, November 14, 2015, at 5130 W. Edgewood Place and will continue on view through January 16, 2016. An opening reception will be held on November 14 from 6:00pm until 8:00pm.

Spanning both of the gallery’s exhibition spaces, STARFUKER will feature the debut of two new major bodies of work. One room will contain two large-scale aluminum and steel sculptures, and the other a group of paintings on shaped canvases. The formal advances in the sculptures and paintings on view represent some of Curry’s most ambitious and risk-taking ideas to date, paralleling an evolution in his approach to the cultural themes always present both on the surface and within the DNA of his art.

STARFUKER, the exhibition’s title, is a red herring: Given the artist’s long-standing connection to Los Angeles and the fact that this show is taking place here, it would seem to point to the spastic and unsavory mixture of sex, celebrity, and power that are part of the city’s reputation and allure. But the stars that appear in this show are of the cosmic variety, and the images conjured by both the paintings and the sculptures point away from the earthly detritus of popular culture that informed earlier bodies of work and toward the spectacularly generative, even erotic chaos that fills the universe at large and appears with increasing acuity in photography of deep space. Curry’s version of the cosmos, however, is one that is informed not only by recent science; equally important are the speculative horizons that are regularly the backdrops of video games, animated movies, and science fiction both in its kitsch-ridden and more paranoid iterations.

The two new major metal sculptures, each painted matte black, strike an unlikely balance between the archaic monumentality of Richard Serra, the modernist biomorphism of Jean Arp and Joan Miró, and the cartoonish contours of the Tomorrowland attractions at Disney theme parks. One sculpture is composed primarily of a curved wall: 12-feet tall and more than 20-feet wide, this imposing element is also the support for a series of tubular, conical, and spherical forms that inhabit its edges and recesses. The other sculpture is organized around a central, rocket-like tower topped with a knotted, tubular element that appears to be precariously balanced with a chain made from looped segments of welded steel. Utilitarian elements like rivets, bolts, and welds (which Curry also uses to sign each sculpture) play an important role in the overall composition of both works.

Until this point, Curry has built the majority of his sculptures using flat forms that intersect along x, y, and z axes. While these new works are extensions of that basic vocabulary, they torque and twist it, suggesting that flatness is no longer only planar, and that even the most rudimentary geometries can be littered with black holes, aporias, and vanishing points. At the same time, they make clear the connection between Curry’s ability to manipulate large tectonic forms and the improvisational freedom and informality of his drawings and collages. Like the chaos-ridden universe itself, these objects are sketches writ large, infinitely reducible, infinitely magnified, tossed off with the exacting rigor of some trickster creation deity. And just as their compositional lightness is played against their physical weight, they channel both the fanciful nature of outer space as it appears in popular culture, and a charred, brooding, post-apocalyptic grandeur informed by the very real prospect of irreversible environmental decay.

This sense of cosmic-play-with-consequences carries through in the shaped canvases that are the sculptures’ counterpoints. They too are composed of both curved and flat planes that are often stacked on top of one another. Their overall shapes resemble helmets, shards of metal, and broadly attenuated fields that read like landscape paintings of other dimensions. The hand- and air-brushed imagery scattered across them, meanwhile, is rife with big bangs and small bangs, trompe l’oeil stellar bursts and graffiti-like tags, as if the cosmic dust and smoky light of nebulae shared an elemental affinity with both spray-paint and bodily fluids. Each is a reminder that in deep space, urban environments, and human bodies alike, creation is always simultaneous with destruction.

For all of their effusively visual pleasures, though, these works subtly reveal the foundational importance of sculpture as a thematic concern in modernist and contemporary painting, whether in Picasso’s bathers from the 1930s, Ellsworth Kelly’s irregularly shaped color fields, or Elizabeth Murray’s explosions of dimensional, vernacular forms. On purely painterly terms, meanwhile, Curry’s compositions exemplify the backlit luminosity emitted by more and more of our intimate household objects, and which constantly vies with the natural world for our attention. His new paintings operate on the principle that this light has found its way into our very conceptions of space and time, and has become a constant reference point by which we interact with the world and understand our place in it. And while he himself uses the computer as a compositional tool, Curry renders both his paintings and his sculptures in immediately tangible materials; in the paintings, in particular, his hand is evident everywhere. The art historical traditions to which these works are powerfully anchored still exert force as a center of gravity.