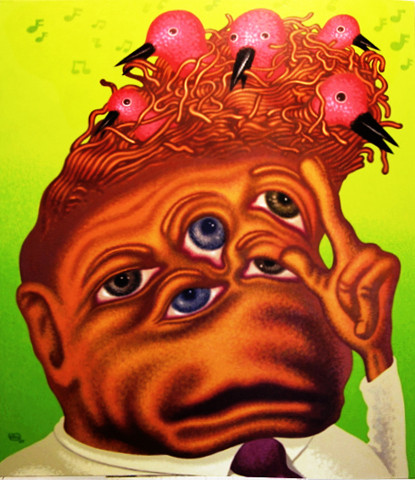 David Kordansky Gallery is pleased to present an exhibition of recent works by Aaron Curry, Richard Hawkins, and Peter Saul. An opening reception will be held on Friday, September 26th from 6 to 9pm, and the exhibition will be on view through November 8th. With strident wit and delicate subversion, these artists dash the boundaries between ‘high’ and ‘low’ culture. Their works marry beauty and vulgarity, desire and disgust, detritus and idols.
Aaron Curry spins fragments of visual culture into what he has termed as a “formal matrix” that mines contemporary advertising, modernist aesthetics, and the twisted style of mid-century comics. Here, three-dimensional reality gives way to depicted space and vice versa: Curry’s stripped-down wooden sculptures have the provisional airiness of paper cut-outs, while images of structural forms feature in flat collages. The artist’s pieces in this exhibition carry the distinct graffiti-esque scrawl that marks his work across media. Like his sculptures themselves, these gestures hint at vaguely anthropomorphic forms somewhere between figuration, internal organs and modernist abstraction.
An incomplete list of Richard Hawkins’ boldly varied practice might include: crude collages, rough clay sculptures of hermaphroditic nudes, abstract canvases, and paintings involving subject matter as diverse as Native American mythology. His new works on view are part of Urbis Paganus, an exploration of gender diversity and sexuality fed by the artist’s ongoing study of Roman sculpture, belief and masculine ideals. If Curry’s method of appropriation invokes the metaphor of a trash-sifting scavenger, that of the archaeologist is fitting for Hawkins - but one with a keen eye for the monstrous and perverse.
Since his debut in the 1960s, painter Peter Saul has cultivated a unique brand of pop art that plugs political satire and surrealism into the idioms of history painting and MAD magazine-inspired slapstick violence. His canvases buzz with conflict, owing in part to the tension between beautifully painted scenes and the repulsive splatter-film antics they depict. Presaging the emergence of artists like Paul McCarthy and Mike Kelly, his indictments of subjects ranging from art critics to George W. Bush to the artist himself have maintained a contemporary resonance throughout his career.
A promethean spirit of re-assembly pervades this exhibition. Aaron Curry, Richard Hawkins, and Peter Saul tap into already fragmented systems and re-mold them, yielding artworks that for all their twisted beauty, are strangely reminiscent of the world we live in.
Richard Hawkins’ work is courtesy of Richard Telles Fine Art, Los Angeles, CA.
Peter Saul ‘s work is courtesy of David Nolan Gallery, New York, NY.
www.davidkordanskygallery.com