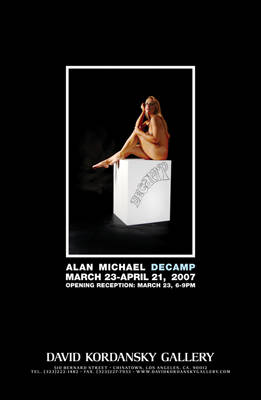 
David Kordansky Gallery is pleased to present Decamp, the first U.S. solo exhibition by Scottish artist Alan Michael. The opening reception will be held on Friday, March 23rd from 6 to 9pm, and the exhibition will be on view through April 21st, 2007. In the exhibition, seven new canvases negotiate a distinct fixation with distortion, quotation and contemporary Glasgow.

Exhibited widely throughout Europe, Michael's work is described by Laurence Figgis as, "... form[ing] a skewed but precise idiolect of cultural references. Photographs, prints and art-world reproductions are meticulously studied and fascistically transformed - duplicated, rotated, spliced and inter-married." Michael's aesthetic enquiries act not as documentation but rather as traces of cultural signifiers. In previous works, serial representations of Oxford shoes, jeans or the cross and circle logo of the Positiva record label bypass subject matter to suggest a structural approach to making art, and a blunt manifestation of repetition anxiety.

In Alan Michael's new body of work, depictions of glassware and windows fracture and reflect interior and exterior spaces. Arrangements of vases and bottles warp a wallpaper-like background of words from Glaswegian bands and pop singer blogs. Simultaneously, the still objects distort what is absent within the picture plane. The glassware's reflections encase images of windows and induce a disquieting reflexivity.

Included in the exhibition will be two paintings of street scenes in which Glasgow is partially revealed through reflections. Devoid of individuals or the intermingling of people, the works convey a tense isolation. The paintings loosely allude to, in the words of the artist, "unpredictable consequences from contact between the lower-class poor and affluent middle-class." In the mirroring of pictorial space, he indirectly references social scenarios of the current moment. Symbolic of his practice, the material referenced in Michael's paintings is embedded with indirect sourcing and a private language that leads to new narratives.