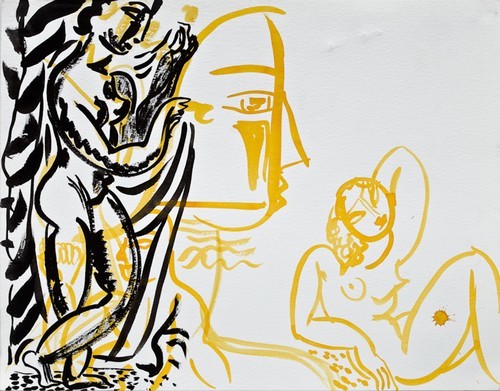 David Kordansky Gallery is pleased to announce Dancing Girl is Four Heads High, an exhibition of new paintings by Amy Bessone. The exhibition runs from April 24 through May 29, with an opening reception on Satuday, April 24 from 6:00 to 9:00pm. A publication on Bessone's work, designed by Brian Roettinger, will accompany the exhibition.

For this, her second solo exhibition with the gallery, Bessone will present large-scale paintings and smaller studies that signal a bold new direction in her work. Even as she continues to address the issues of figuration, femininity, and high and low culture that animated her earlier paintings, Bessone has expanded the conceptual paradigm of her practice to encompass a new level of generous and physical immediacy.

The porcelain miniatures that functioned as 'models' in Bessone's earlier work have been replaced here by a conceptual take on the model that embraces the entire sweep of the artist's approach to form, representations of the female body, and her particular relationship to the picture plane. The very notion of the model is called into question: no longer merely an object or a human form frozen by the artist's gaze into a particular pose, for Bessone the model has become a living constellation of painterly gestures, cultural touchstones, art historical references, and formal responses to an evolving composition.

One of the most immediately recognizable facets of the new work is its use of drawing and a strong sense of the line. Reminiscent of Hitsuzendo, a form of Zen ink drawing derived from sword exercises, Bessone's line effortlessly carves monumental female forms against brightly-colored monochromatic grounds, demarcating presence at some moments and absence at others. While the line 'chisels' out the bodies from the grounds, it also pools around the bodies to create a shadowy, secondary form of negative space. In this way the work continues its intimate relationship to sculpture, though here too the notion has been enlarged to include the physical correspondence between sculptural and painterly practice. No longer is it the representation of the sculptural object that is on view, but rather the playing out of conceptual strategies employed by a sculptor to define three-dimensional space.

The emphasis on this line/ground relationship also forges a relationship between Bessone's new paintings and animation cells. Dancing Girl is Four Heads High, the title of the exhibition, is borrowed from a note written on a drawing by a Terrytoons animator. While a classical, or 'high,' approach to drawing dictates that a human figure be seven 'heads' tall, in cartoon life morphological differences are possible and even encouraged; by means of such differences the artist can emphasize emotional and characterological traits, and the body can be rendered simultaneously beautiful and grotesque.

Bessone, however, subverts the animator's impulse by freely re-proportioning the human form according to her own aims. A thigh can take on the structural importance of a torso, or an elbow can take on the role of focal point usually indicated by a face or a head, and the body-as-subject is described as a monumental drawing across the picture plane. As in gymnastic floor exercise, in which an athlete executes a routine of movements and poses against the ground of the mat, Bessone pushes her figures into a series of complex relationships with the edges and corners of the canvas, so that figuration itself becomes a form through which the basic constitutive elements of painting can be explored.

Amy Bessone's work was recently on view in Beg, Borrow and Steal at the Rubell Family Collection in Miami. She has had solo exhibitions Salon 94, New York and Xavier Hufkens, Brussels. In November of 2010 her work will be the subject of an exhibition at the Rennie Collection in Vancouver. Bessone lives and works in Los Angeles.
www.davidkordanskygallery.com