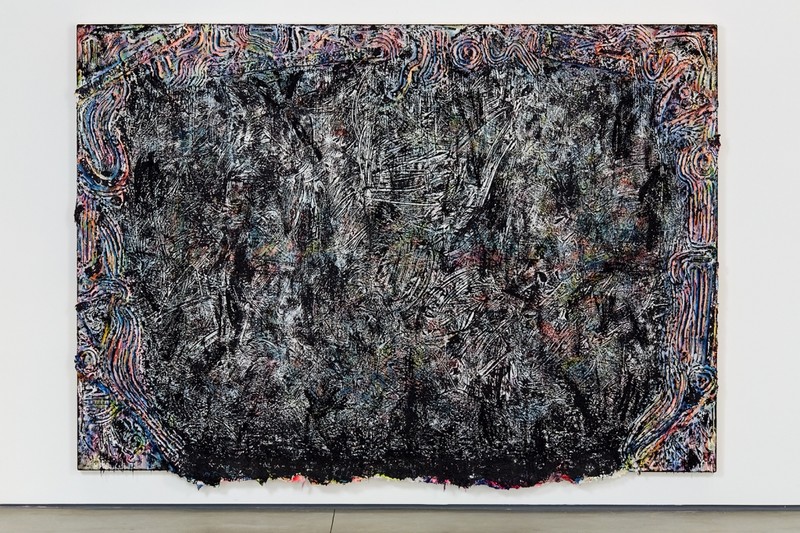 David Kordansky Gallery is pleased to announce Painting (Organic), an exhibition of new work by Andrew Dadson. The exhibition will open on Friday, May 29, 2015 at 5130 W. Edgewood Place and will continue on view through July 11. An opening reception will be held on May 29 from 6:00pm until 8:00pm.

Andrew Dadson heightens the relationship between painting and the surrounding physical world by experimenting with painting’s foundational components (color, texture, medium, and support) and by bringing awareness to the body and its modes of perception. Displaying the breadth of his inquiries, the exhibition Painting (Organic) features three interrelated bodies of work: paintings that share concerns with sculpture; a major display of photographs that document abstraction in the built environment; and an installation of colored lights and painted live plants, the latest in a series of plant-related works that he has made over the last decade. Each work addresses how marks, painted or otherwise, affect and are informed by the contexts in which they are made.

The paintings in this exhibition are amongst Dadson’s largest to date, and their making involves techniques new to his process. These include, for instance, the temporary application of pieces of foam to the canvas. Before the foam is eventually removed, paint is sculpted around it so that accumulations of paint medium approaching an inch or more in thickness are left behind. Working within these built-up areas using hand tools, as well as his own hands and fingers, Dadson allows his repertoire of marks to evolve organically (to allude to the exhibition’s title) from actions that were already elements of his practice.

If earlier paintings highlighted the scraping that unified their many layers of medium and pigment, and that created the characteristic masses that hang off their top or bottom edges, then the paintings in this exhibition place such processes within a broader vocabulary of moves. The hanging masses are no longer simply the secondary results of a primary physical action, but also parts of an overall field where paint is manipulated as a physical thing in its own right rather than as a material designed to depict something else. Dadson now treats these masses as another kind of surface to be manipulated, sculpted, or marked, i.e., mark and surface have become one. He then raises the sculptural stakes even further by spraying these highly textural compositions with differently colored paints from each side, creating a lenticular effect that is put in motion when a viewer walks past the painting.

Part sculpture, drawing, and performance, the active, cross-disciplinary nature of Dadson’s paintings finds a corollary in their titles, which he often borrows from canonical examples of conceptual and performance art. New paintings, for example, make reference to Bas Jan Ader, Jay DeFeo, Wally Hedrick, and Robert Smithson. But perhaps the clearest indication that Dadson is interested in loosening painting’s attachment to its history comes in the form of the installations and photographs that he has produced since the beginning of his career, and which play a key role in this exhibition.

Displayed as a grid of 160 framed inkjet prints, Cuneiform, 2015, is a series of photographs that documents the abstract marks revealed when signs are removed from exterior walls. Taken in Vancouver and Los Angeles, the images focus on the gestures made by sign-posters as they apply their glue. Dadson organizes these photographs into an alphabet-like system, raising questions about the degree to which the marks, ordinarily hidden from view, are thoughtfully made. The anthropological flavor imparted by the presentation suggests that such distinctions might not matter, and that the marks, for all that they reveal about the anonymous people who made them, are part of a formal ecosystem that also includes the colors and textures of the walls on which they are drawn.

By excavating visual histories like these, Dadson makes clear that viewing the world demands the same level of activity and commitment as painting, sculpting, or other mark-making. The installation Black Painted Plants, 2015, calls attention to several different kinds of looking, including those that can only happen over long periods of time. Inspired by an archival photograph of Matisse’s studio in which plants cast an abstract pattern of shadows on a wall, Dadson has placed a series of filtered lights before a group of house plants; as the work’s title suggests, these plants have been painted black with a non-toxic paint, bringing uncanny sharpness and contrast to their forms. The subtle hues created by the lights, meanwhile, change gradually with the time of day, infusing the plants’ silhouettes with a complex range of impressionistic moods. As the plants grow over the course of the exhibition, green emerges from beneath the black paint, a reminder that natural forces beyond our control are ultimately responsible for what we see and how we see it.